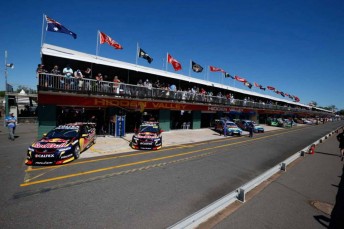 Different engine configurations could be allowed into the V8 Supercars Championship as soon as 2017, category CEO James Warburton has revealed.

As previously reported, Warburton has been meeting with representatives from incumbent and potential new manufacturers over recent weeks, discussing the future direction of the championship.

The former television executive is now formulating a white paper for a “2017 generation two” V8 Supercars platform, which he will present to the category’s Board.

Two-door bodyshapes and different engine configurations are said to be key points of discussion, with the championship keen to appeal to as many manufacturers as possible.

The moves comes just 18 months after the debut of the current rule package, which has seen Nissan, Volvo and Erebus invest significant money developing production-based engines to the 5.0 litre V8 format.

“What we’re working towards is a 2017 generation ‘two’ and a completely different landscape without (local automotive) manufacturing,” Warburton told the V8 Supercars website.

“So everything’s on the table and that’s why we’re talking to manufacturers at the moment, participating and non-participating.

“The beauty of the landscape we have is that anything is possible. So you could look at a different configuration, different power plants.

“That’s not to say we are suddenly going to make wholesale changes, it may be that we decide to stay as is.”

Warburton stressed that reviewing the engine configuration is particularly important to keeping the category road-relevant.

“The ethnicity of the country’s changed,” he added.

“We’ve got a third of the population that weren’t born here and have probably never driven a V8.

“So all I’m saying is we need to look at it from an overall point of view and think about what we’re doing and where we are heading.”

V8 Supercars’ efforts to look beyond V8 engines coincides with that of NASCAR in the United States, which is known to be investigating a V6 turbo future.

Holden has already declared that it will not follow Nissan and Volvo’s lead in racing a bodyshape with a V8 engine if the corresponding road car is not sold in that configuration.

Ford’s Falcon and Holden’s Commodore are both set to be consigned to history alongside the end of local manufacturing for the two firms in 2016 and 2017 respectively.

Holden has committed to the category through to the end of 2017, while Ford is yet to confirm its plans beyond the current season.