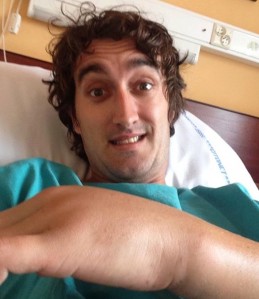 Australian Chris Holder has been ruled out of this weekend’s Danish Speedway Grand Prix due to his recent wrist injury.

Holder suffered a fractured wrist during a Danish League match and he has subsequently undergone an operation for the the injury.

Surgeons inserted two plates to his wrist in an effort to shorten his time on the sidelines.

It is a cruel blow to Holder’s 2014 World Championship ambitions, where he currently sits just eight points from the Championship lead.

This year’s title race is the tightest that has been seen in the history of the Grand Prix era.

The Danish Grand Prix, to be held this weekend at the Parken Stadium in Copenhagen, represents the halfway point of the 12 round season.

Holder remains hopeful of returning for the British Grand Prix at the Millennium Stadium, Cardiff on July 12.

The 2012 World Champion will be replaced with 22-year-old Michael Jepsen Jensen – a Danish star that took a win as wildcard in his first ever Grand Prix in 2012 at Vojens and won both the World Under-21 Championship and Speedway World Cup in that year.

‘MJJ’ brings the number of Danes in the field to five for the Danish Grand Prix.