The Australian GT Championship is set to be bolstered by the local debut of Reiter Engineering’s Chevrolet Camaro GT3 later this season.

Melbourne-based AGTC outfit M-Motorsport has confirmed that it is importing two of the 7.9 litre V8-powered Camaros into Australia.

The first is expected to arrive in time to compete in the final round of this year’s championship at Highlands Park in November before a likely assault on the 2015 Bathurst 12 Hour.

Yet to be seen in Australia, the car has been designed by Reiter as a cut-price alternative to the more expensive European GT3 machinery.

M-Motorsport and its owner Justin McMillan enjoys an existing relationship with Reiter through the German company’s work on the Lamborghini Gallardo GT3s run by the team over the last two seasons.

While McMillan and co-driver Steven Richards will continue to race M-Motorsport’s Lamborghini, the former is highly enthusiastic about importing and preparing the Camaros for customers. 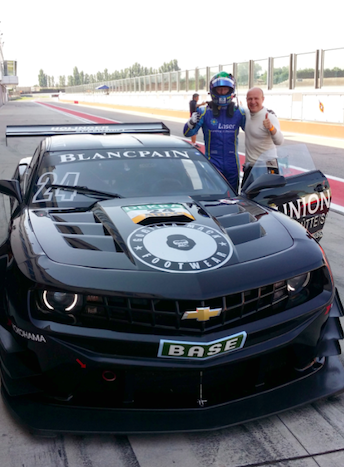 Richards, Enge and the Camaro

“As a fan of American muscle cars, my interest was tweaked almost as soon as I knew about the Camaro,” said McMillan, who has sold the first example to a yet-to-be named party.

“Having dealt with Reiter with the purchase of our Lamborghinis, I called him almost immediately to see what we could do, and Hubert Thanbichler and the team set up a private test session for us earlier this year at the Adria Circuit in northern Italy.

“Ross Lilley and I went over and turned some serious laps, and I was very impressed, so I tentatively ordered a car ahead of another test just prior to the Le Mans weekend where Steve (Richards) also came over to offer his opinion.

“The first car is about to leave Germany and will be here in fairly short order,” he added.

“We have some pretty big plans for the Camaro, and expect to see a couple of them competing regularly in Australia in the next 12 months.”

After driving the car, Richards believes that the Camaros will be well suited to gentleman racers looking for a cost-effective way into GT3 machinery.

“The car was exceptional,” he said.

“Very different to the Lamborghini. I’d say the Lamborghini is more like an open-wheeler, more reliant on aero and mechanical grip, whereas the Camaro is very much like a V8 Supercar.

“The Camaro matches the Lamborghini on pace, but the way it achieves that speed is in a totally different way.

“It’s amazing how quickly it accelerates out of the slower corners,” he continued of the car, which boasts some 650bhp and 800Nm of torque.

“What that will mean in Australia on our circuits and under our weather conditions, only time will tell, but it has proven quick in the GT Masters in one-hour races in Europe, so I’d expect that we’ll face similar situations.

“I also think it’s a better proposition for the gentleman driver because it’s less reliant on carrying mid-corner speed like say the Ferrari and the Lamborghini. It’s more user-friendly.

“It’s also significantly cheaper than the Italian thoroughbreds too, and that will make it more attractive to those drivers on the fringe that don’t want to make such a big investment.”

M-Motorsport confirmed last Friday that versatile Kiwi Craig Baird will join McMillan and Richards in its Lamborghini for next year’s Bathurst 12 Hour.