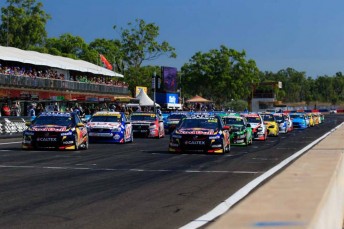 V8 Supercars CEO James Warburton is optimistic of an increased grid size next season as the category kicks off a tender process for its three currently unused Racing Entitlements Contracts.

V8 Supercars has confirmed the start of the tender process following its recent sign-off from the V8 Supercars Board.

By handing back their RECs, the three entities avoided the hefty fines levied to REC holders who miss an event.

The tender process is being managed by independent auditing firm Ernst & Young.

A statement from announcing the tender said that “V8 Supercars has already had interest from numerous parties in Australia and overseas”.

“This is a fantastic opportunity to compete in one of the most successful categories in world motorsport and we believe there will be significant interest,” added Warburton.

V8 Supercars is urging interested parties to contact it via [email protected], with registrations to participate in the process required by July 8.

Any successful bidders will be able to join the championship from next season.