PREDICTOR: ‘Give it some Jandal’ wins BP fuel

PREDICTOR: ‘Give it some Jandal’ wins BP fuel 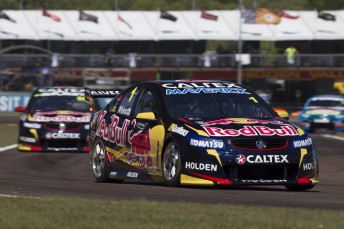 Castrol EDGE V8 Predictor ‘Give it some jandal‘ has taken round honours after the sixth V8 Supercars Championship event at the Darwin 400 scoring themselves a $100 BP fuel card.

The Give it some jandal team’s massive 190 points haul came with a prediction accuracy of 61% after they took full advantage of the new-to-2014 bonus points system and collected and additional 120 bonus points.

In the overall league standings team Arne’s Mob has taken top spot and raced away to a 50 point lead over SCATTERS. Team Murph slips back to third overall after leading the standings heading into the round.

The overall drivers’ points winner for the weekend went to Red Bull Racing Australia’s Jamie Whincup after his double race win on Saturday.

In the Experts’ league Andy Priaulx took out round honours with 30 points for the Hidden Valley-based round.

Greg Rust was second on 22 points while Speedcafe.com only managed 15 points however does hold onto the lead in the overall standings amongst the Experts.

Round 7 of the V8 Supercars Championship takes crews to North Queensland for the Castrol Townsville 500 – July 4-6.