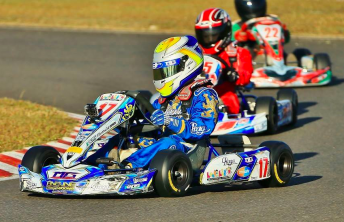 Jett Johnson is closing in on the Central Queensland title

Third generation racer Jett Johnson is honing in on his first major title.

The nine-year-old grandson of Dick Johnson took a clean sweep of the four races at the Bundaberg round of the Central Queensland series at the weekend.

Jett leads the series going into the final Rockhampton and Gladstone rounds in the next few months.

Overseeing Jett’s latest campaign were mum Bree and family friend and former Dick Johnson Racing employee Tony Monks, while dad Steven was at the V8 Supercars round in Darwin.

“He’s still a bit younger than a lot of the kids (many of whom are 11) but I think for the first time he wasn’t out being a ratbag in between races,” Steven Johnson told Speedcafe.com.

“He was helping set up his kart and thinking about the next race and what to do.

“He’s been at it for two years and he’s got that experience now where we are taking him to some of the bigger races.”

“Jett’s real desperate to win the series and I like the way he’s going about it.

Johnson said young Jett is motivated and passionate about his karting.

Jett Johnson staving off the pressure

“It is just about spending time together and staying in the cheapest motels we can find and just having a great time,” he said.

“But I’ve said to him just because you are nine and the other kids are 11 doesn’t mean you can’t beat them. You can’t use the age thing as an excuse.”

Jett will continue to sharpen his skills at club meetings and the state championships ahead of the next round of the CQ series at Rockhampton in six weeks.

“The weekend after the Townsville V8s we are heading to Proserpine for the state open championships,” he said.

“The good thing is the Proserpine meeting is on the school holidays so we will duck up there a couple of days early and do some practice.

“Every spare weekend I’ve got at home and will take him somewhere for a race.

“We don’t push him. I’ve always said to him that if it gets to the stage where I’m more excited to get to the karting races than you are we will stop and do something else.

“But at the moment he’s pestering me every weekend to go karting.”