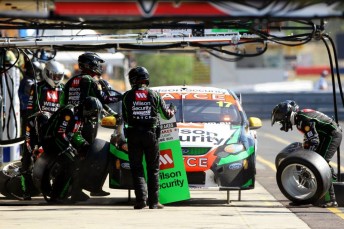 The Dick Johnson Racing crew at work in Darwin

Dick Johnson Racing co-owner Steve Brabeck says his team is “on tenterhooks” as it awaits Team Penske’s final decision on whether it will take a majority stake in the V8 Supercars team.

Dismissing suggestions that a deal has already been completed, Brabeck told Speedcafe.com that his squad is still waiting for Penske to make a firm decision.

Talks between the parties have been ongoing since last year, with Penske keen to leverage recently acquired trucking interests in Australia with a racing program.

“We’re all on tenterhooks now waiting to see what happens,” Brabeck told Speedcafe.com.

“We can’t do any more. We’ve given them as much information as we can and I think V8s (V8 Supercars) have been very helpful too.

“We’ve helped them a lot on the technical side from the team perspective to help them understand what they’ve got to do and what the costs are like in running it if they’re going to invest.

“We should know within the next couple of weeks which way they want to go with it.”

Speedcafe.com understands that a mutually agreed deadline for finalising the takeover has been set for the week after the Castrol Townsville 500 (July 4-6).

It is said that current DJR co-owners Brabeck, Dick Johnson and Ryan Story will retain a minority stake in the team under the proposed deal with Penske.

The DJR name, which is the oldest in the V8 Supercars Championship, will also remain in some form, with a “DJR Team Penske” moniker floated as a probable candiate.

“They understand the brand,” said Brabeck of Penske’s attitude to keeping the DJR name alive.

“And they don’t want to come in as the ‘Yankee invasion’.

“They want to come in and be a part of the industry itself, which will be better for them from a marketing perspective too.”

Should the deal go through as expected, Penske would almost certainly bolster the team’s current staff with its own employees, including importing a general manager from the United States.

DJR remains largely in the dark, however, on Penske’s plans for changes to its driver line-up.

With his future in the NASCAR Sprint Cup with Richard Petty Motorsport still up in the air, Marcos Ambrose continues to be heavily linked to a V8 Supercars return with the team.

Regardless of its drivers, Brabeck says that the whole sport would benefit from Penske’s arrival.

“The sport really needs that boost,” he said.

“I think everyone up and down pitlane will agree that we need that to have other sponsors see value in what we do.”