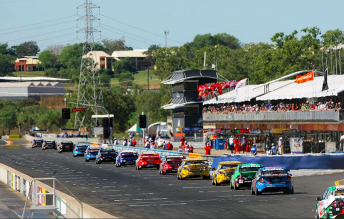 V8 Supercars is this week set to formally open a tender process for the three Racing Entitlements Contracts that have sat dormant during the 2014 season.

This year has seen the grid shrink to 25 cars after Triple F Racing, Tony D’Alberto Racing and Lucas Dumbrell Motorsport (which has continued as a one-car team) each failed to enter before the December 1, 2013 deadline.

The three RECs in question where therefore defaulted back to V8 Supercars, waiting to be put out to tender.

The process, expected to take approximately four weeks, will give the first clear market-driven value of an REC since the 2015-2020 media rights deal was completed last December.

Under the category’s REC agreement, V8 Supercars can only elect to absorb a REC and therefore permanently reduce the grid size by matching a bid from an outside entity.

By handing back their RECs before the deadline last year TDR, Triple F and LDM avoided the hefty fines levied for any active RECs that do not front for race meetings.

The three parties will receive the proceeds if their RECs are sold, minus a transaction fee taken by V8 Supercars.