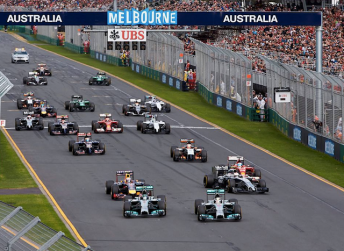 Standing restarts in F1 are proposed for next season

Formula 1 is in the middle of a turbulent era as it sees in its first season of dramatic technical regulation changes.

Replacing the 2.4-litre V8 naturally aspirated engines with the 1.6-litre turbo-charged V6 units has brought with it criticism over a lack of engine noise, which many argue have decreased the spectacle.

The sport has been working on a number of ways to improve its show, which has included the testing of megaphone exhausts and metal skid-blocks to create sparks.

The most attention-grabbing proposal over the last week has however been the idea of replacing the traditional rolling Safety Car restarts with standing restarts.

Already gaining approval from the F1 Commission, the FIA World Motor Sport Council is expected to rubber stamp the proposal at its meeting in the coming week.

In the pursuit of raising the spectacle there is much to consider with the standing restart idea.

By its very nature there is the propensity to trigger more accidents and there is the problem of taking time, which means that races could then not go their full required lap distance and be cut short in the confines of the current two-hour maximum.

There is also, like the start of a grand prix, the prospect of significant positional changes.

The proposal will see lapped cars unlap themselves, with the field lining up on the grid in race order once the Safety Car period has ended before a restart is ordered.

Questions such as where team personnel are permitted to be on the restart and whether tyres will be allowed to be changed on the grid also remain.

What do you think? Should F1 implement standing restarts?

Have your say in the poll below.