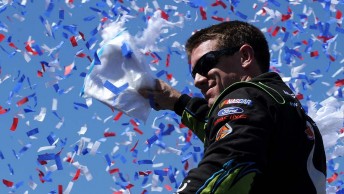 Edwards celebrates his second win of the season

Carl Edwards has scored his first roadcourse win in the NASCAR Sprint Cup Series with victory in the Toyota – Savemart 350 at Sonoma outside San Francisco.

The result is Edwards’ second win of the season, the 10th straight different winner at Sonoma and also the eighth consecutive winner at the track to score their first roadcourse win.

Australia’s Marcos Ambrose literally drove the wheels off his Ford to climb from 23rd to be in the lead with 25 laps remaining. However, Edwards got the jump on a re-start and Ambrose came under from behind. Battling with the likes of Jeff Gordon, Dale Earnhardt Jr. and Jimmie Johnson over the closing stages, Ambrose was down to the canvas on his tyres as he brought his car home in eighth.

Ambrose added to his record of 11 top-10 finishes in the 13 roadcourse races contested in the Sprint Cup Series.

“It was a handful,” said Ambrose

In a race that tyre strategy was everything, Edwards made just two stops in the entire 110 laps as he sat inside the top-10 throughout the first 60 laps. On the longer runs Edwards car had excellent balance and this proved critical in the second half of the race when five separate caution periods were waved. Even with the likes of Earnhardt Jr. making a total of five pit stops, Edwards car proved it had more than enough to take the win from a fast finishing Gordon.

“I grew up watching Jeff Gordon and to have him in my mirror was awesome,” said Edward.

“This team has been working very hard and it is very special to part of something like this.

“That’s the best I’ve got and it was really not good enough.”

The final 30 laps brought plenty of action with the likes of Matt Kenseth and race setters Kevin Harvick, Clint Bowyer and AJ Allmendinger all involved in major incidents.