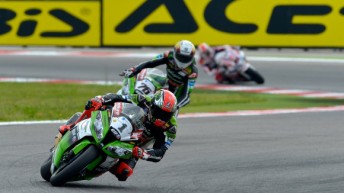 Tom Sykes does the double in Misano

Tom Sykes has opened up a commanding lead in the World Superbike Championship after recording an impressive double victory at Italy’s Misano circuit.

The Kawasaki rider significantly boosted his title defence after he dominated both races from pole position despite battling a hand injury picked up from an incident at Sepang two weeks ago.

The double victory has opened up a healthy 39 point lead at the top of the championship standings.

The polesitter made no mistakes at the start of race one as he led the field into the first turn.

Toni Elias briefly held second before Baz picked off the Spaniard before setting his sights on Sykes.

It didn’t take long for Sykes to stamp his authority on the race as the Brit reeled off a series of quick laps to build an advantage.

The reigning champion maintained the pace throughout the races he took the chequered flag by five seconds from Baz. Aprilia’s Marco Melandri claimed the final place on the podium after initially dropping to eighth on the opening lap.

Sykes faced a slightly tougher prospect in race two after slotting behind Ducati’s Davide Giugliano from the start.

However, the order soon changed as Giugliano was judged to have jumped the start and was subsequently issued with a ride through penalty.

Once out in front Sykes eased into a healthy lead while Baz was forced to defend second place from Melandri and Guintoli. The pair tried to pass the Frenchman on several occasions but each time the Kawasaki man responded to stay ahead.

The battle allowed Sykes a free run to the flag to pick up his second win of the weekend. Baz just held off Melandri for second while Guintoli finished in fourth.

The World Superbike Championship moves to Portugal’s Portimao circuit for round eight on July 4-6.