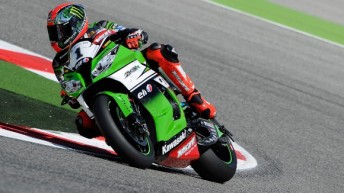 Kawasaki’s Tom Sykes has secured pole position for the seventh round of the World Superbike Championship at Italy’s Misano circuit.

The reigning world champion came through a hard fought session to secure the all important pole by almost two tenths of a second from Ducati’s Davide Giugliano.

Sykes once again proved his pedigree over one lap as he claimed his 21st pole position of his career with an impressive 1.34.883s effort.

Ducati’s Chaz Davies as seventh fastest and will start alongside PATA Honda’s Jonathan Rea and Crescent Suzuki’s Eugene Laverty. Both Honda and Suzuki struggled to match the pace set at the front.

Althea Ducati rider Niccolo Canepa was the top EVO class rider as he rounded out the top 10.

Meanwhile, Leon Haslam suffered a crash in the final part of qualifying and will start Sunday’s two races from 12th position.

Australia’s Bryan Staring will start from 24th on the grid for IRON BRAIN Kawasaki.