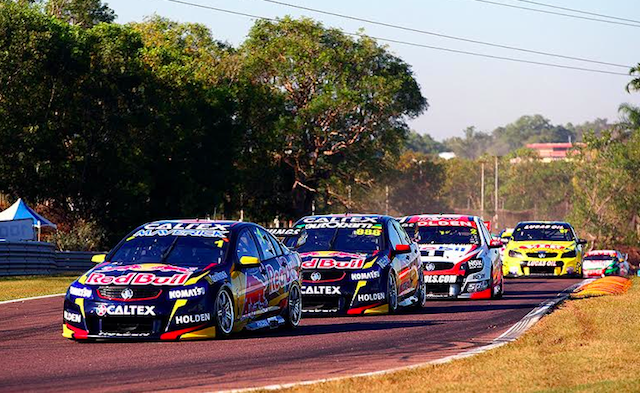 Whincup and Lowndes were unstoppable on Saturday

Red Bull Racing Australia will need to navigate a potentially complex tyre strategy puzzle in order to complete its domination of the Skycity Triple Crown in today’s 200km finale.

The Jamie Whincup and Craig Lowndes driven Holdens were untouchable on Saturday, recording a pair of commanding one-two finishes.

While Races 17 and 18 were 100km sprint races on the hard tyres, today’s 200km encounter will feature both tyre compounds.

Teams have been given two sets of soft compound rubber to negotiate what will need to be at least a three-stint race thanks to the compulsory 120 litre fuel drop.

The expected ‘standard’ strategy appears to be reusing two fronts from each of the Saturday races in the first stint before completing two runs on the softs to the chequered flag.

Seven cars, however, will start with the benefit of having a set of much newer hard tyres to play with, potentially allowing them to enjoy a healthy track position gain in the first stint.

Lee Holdsworth, Will Davison and James Moffat all encountered issues that saw them fail to finish a race on Saturday, while Rick Kelly, Todd Kelly and Russell Ingall each ran Race 18 on their Race 17 tyres, saving a complete set.

“On paper it sets up for a good Sunday,” said Todd Kelly after being lapped on the way to last while on the old rubber yesterday.

“But we need to fulfil our end of the bargain; hopefully we do nail that because it will provide a good little advantage at the start.

“Hopefully we’ll be able to make up some ground, and slightly change our strategy on the soft tyres.

“The potential is there to have a better result than what we’ve had so far.”

Whincup, who has bemoaned the thin tyre allocation this weekend, said he expects the seven with newer hards to enjoy a dramatic advantage early, before the traditional front-runners win out once on the softs.

“If they qualify well then we won’t see which way they went,” he said of those with newer hard tyres.

“Most likely at the start of the race on better tyres they’ll be two seconds a lap faster.

“But we’re still confident that when we put the other tyres on we’ll be able to fight back.”

The performance gap between new hards and those which have done a race on the front of a car yesterday is thought unlikely to be quite as big as Whincup suggests, however, with front-wear not particularly high on the low-grip surface.

The hard-soft-soft strategy was meanwhile only one of several options being mulled over by teams in the paddock on Saturday.

Cross-swapping tyres during pitstops would allow drivers to run all three stints using different combinations of their eight softs.

Red Bull had itself been spotted practicing such stops in the pitlane at Hidden Valley earlier in the weekend.

Running soft-hard-soft would alternatively allow teams to gain track position in the first stint while also garnering knowledge on soft tyre life, with which they could then best plan the timing of their final stop.

Last year’s 100km Hidden Valley Sunday race saw few drivers run more than 25 laps on the softs, by which point their lap times had fallen to about what can be expected from a 35 lap old hard.

Which strategy proves to be the best in reality during Race 19 will, as usual, be greatly impacted by the appearance of a Safety Car.

A full course yellow is yet to be seen in any of the four Sunday races since Adelaide, while the current run without a Safety Car period sits at over 800km – stretching back to the early stages of Race 12 at Pukekohe.

Lowndes believes that the open nature of the run-off areas at Hidden Valley will likely see today’s encounter again run green for its duration.

“I think around here it really needs a car breaking down on track because there is a lot of room (to recover) if a driver makes a mistake,” he said.

“We’ll have to look at that and see if it’s a factor, but with the way the races have been going… I don’t think we’ll have one.”

The V8 Supercars will hit the track for a 20 minute qualifying session at 1240 before Race 19 of the championship from 1515. 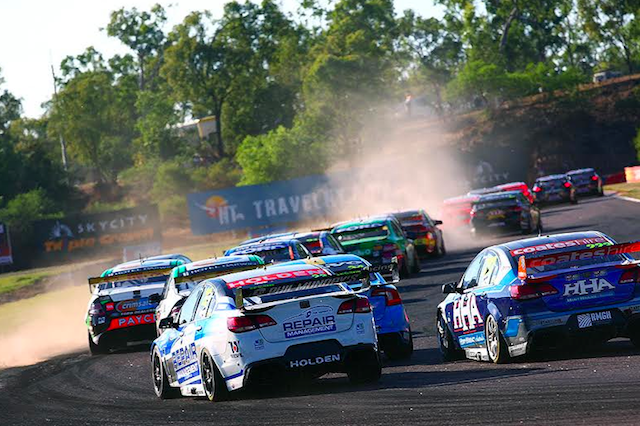