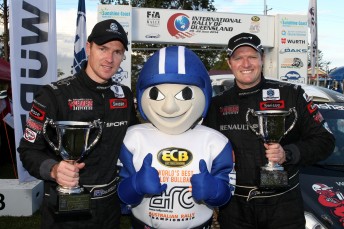 Pedder (right) and Moscatt celebrate on the Sunshine Coast

“We’ve had good weekends in Canberra and WA this year but been let down at the last minute by problems,” said Pedder.

“So it’s a terrific feeling for me, for Dale (Moscatt, co-driver) and for the entire Walkinshaw team to secure this result this weekend.

“I went out on the first two stages this morning and had a really big go. I had a good lead but I wanted to put it right out of Brendan’s (Reeves) reach, and we were able to do that.”

The result helps Pedder bridge the gap to Championship points leader Reeves, who continued to maintain a consistent pace during Leg Two to finish second in the ECB ARC and third outright in the APRC.

“Friday obviously didn’t go to plan (when he collided with a tree on the ARMOR ALL Power Stage) but everything after that has been perfect,” said Reeves.

“The car has performed perfectly, we got it to the finish and we still have the points lead over Scott.

“Scott drove really well, he was really fast and even when he had a good lead over us he was still pushing, which made no sense to me. We look forward now to the next Round in South Australia.”

Citroen’s Tony Sullens rounded out the podium, finishing third but over seven minutes off the outright pace set by Scott Pedder. 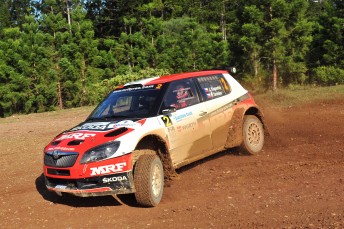 At the head of the field Czech Jan Kopecky cruised home to an easy APRC victory, eventually finishing over a minute ahead of Scott Pedder.

“We’ve travelled a long way from home in the Czech Republic to this rally, so it’s a special feeling to hear our country’s national anthem on the podium,” said Kopecky.

“The stages here were beautiful and very challenging. It’s been a great experience for us to be here and hopefully we’ll be able to use this for the rest of the season – every kilometre on gravel is valuable to us.”

In the Classic category Neal Bates swept past a limping Jack Monkhouse early in the day, and was never challenged winning by almost seven minutes.

“A really enjoyable weekend! Yesterday was a bit of a downer when we lost four minutes, but it also forced us to really fight hard and some of the times we set were fantastic in the old Celica,” said Bates.

“We really pushed hard all day again today and even managed to get within 0.7 seconds of setting a fastest stage time outright.”

The next Round of the East Coast Bullbars Australian Rally Championship takes crews to Scouts Rally SA, the traditional winter rally offering drivers the fast and flowing roads of the Adelaide hills from 1-3 August.