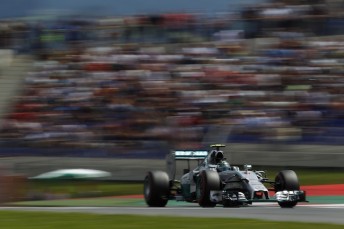 Nico Rosberg held off a late charge from team-mate Lewis Hamilton to extend his championship lead with victory in the Austrian Grand Prix.

The Mercedes drivers were forced to overcome an impressive showing from the Williams duo of Felipe Massa and Valtteri Bottas who led the early stages of the race.

However, the power of the Mercedes eventually shone through with the race victory coming down to battle between Rosberg and Hamilton, who recovered well from ninth on the grid.

The pair enjoyed a hard fought dice right to the chequered flag with Rosberg just pipping the Brit to open up a 29 point lead in the standings.

Massa led the field into Turn 1 from pole position while Rosberg jumped his Williams team-mate Bottas for second.

It was Hamilton who made the best start as he stormed past Kimi Raikkonen and Daniil Kvyat on the run down to the first corner.

At the front Bottas responded and immediately re-passed Rosberg for second while Massa began to open up a small advantage.

Hamilton continued to charge and by the end of the lap he found himself in fourth position after passing Daniel Ricciardo, Kevin Magnussen and Fernando Alonso.

Sebastian Vettel’s weekend went from bad to worse as he went a lap down after he lost suddenly lost drive before he was able to re-fire his Red Bull. He eventually retired from the race on lap 37 as his miserable season continues.

The top four soon galloped away from the rest of the field with Massa leading Rosberg, Bottas and Hamilton.

Massa continued to lead up until the first round of pit stops when a slick stop from Mercedes gifted Rosberg the net lead.

Bottas also leap frogged is team-mate and Hamilton to rejoin in second, but he soon lost the position to the charging Mercedes behind.

But Massa was the big loser as he dropped from the lead to fourth and began to fall away from the front three.

Alonso maintained his position of best of the rest in fifth ahead of Magnussen’s McLaren.

Meanwhile, Bottas piled the pressure on Rosberg at the front with his Williams matching the pace of the Mercedes on soft tyres.

The race complexion changed following the second round of stops as a flying lap from Hamilton helped him pass Bottas for second while Rosberg rejoined in the lead.

The final stint of the race produced another tactical battle between the two Mercedes team-mates.

As the race reached its climax Alonso mounted a charge and began to close in on Massa in fourth.

In the end, Hamilton closed in on Rosberg in the final stages but he was unable to pass the German who went on to record his third victory of the season.

Alonso picked up 10 points for Ferrari in fifth ahead of Force India’s Sergio Perez and McLaren’s Kevin Magnussen.

Ricciardo passed Nico Hulkenberg on the final lap for eighth while Raikkonen completed the top 10.