Jubilation at FPR after “staggering” win

Jubilation at FPR after “staggering” win 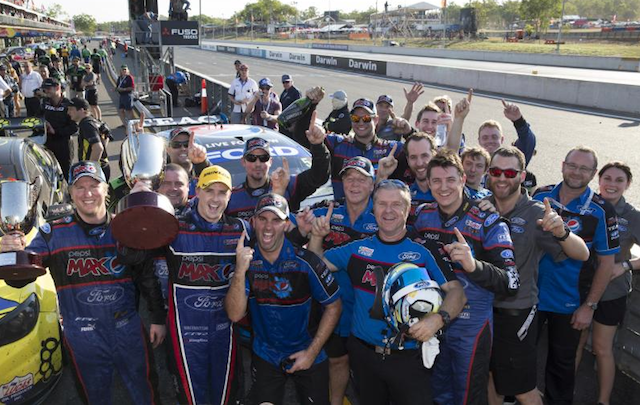 Rather than follow the hard-soft-soft plan employed by the majority of the field, FPR’s Falcons of Mark Winterbottom, Chaz Mostert and David Reynolds all made their two allocated sets of softs last three stints.

The plan saw new tyres used on Winterbottom’s car in the first two stints, before the team made the most of its used rubber in the last.

Despite rejoining from his second stop just four seconds ahead of Jamie Whincup, who had four new softs, Winterbottom was able to hold the Red Bull Holden at bay over the final 17 laps.

Shane van Gisbergen’s Tekno Holden, on the same strategy as Whincup, eventually emerged as Winterbottom’s nearest challenger, but ran out of time to beat the Ford to the flag.

A Safety Car on Lap 26 of 69 had earlier negated the buffer that the FPR drivers had built over their rivals in the first stint and convinced Edwards that his squad could no longer win.

“We lost our 45 second advantage because of that Safety Car,” Edwards told Speedcafe.com.

“In theory what we did shouldn’t have worked because a Safety Car was always going to ruin our day.

“I’m staggered that we won actually. I thought we’d get a fifth or sixth at best after that, because to lose 45 seconds is a huge amount of time.

“It was an unbelievable drive by him (Winterbottom) and a great job by the guys to give him a car that was gentle enough on its tyres to allow him to race guys with much fresher rubber.”

Edwards also paid tribute to the efforts of the Dunlop crew, who also turned tyres for Jason Bright’s Brad Jones Racing Holden during the race.

“We’ve never done anything like that before, rushing down to Dunlop,” he said of the tyre-turning, which was also a mid-race first for Dunlop in V8 Supercars.

“We had Dunlop all primed, ready to accept the tyres, whip them off the rims, swap them and everything.”

Winterbottom meanwhile said that holding off the charging Van Gisbergen while on older tyres made it a career best drive, topping his own performance at Bathurst last year.

“I think that’s the best moment I’ve ever had with my team,” said Winterbottom, who had started the race 10th after a difficult qualifying.

“Bathurst last year was huge but to hold on, that was a really cool win and it’s hard to do.

“The boys were counting down the laps and it was pretty intense.

“Shippy (engineer Grant McPherson) has done it a few times with Will (Davison) hanging on at the end but this was my first one, so it was really cool.”

Reynolds followed the same tyre strategy as Winterbottom on the way to fourth, while an early first stop for Mostert due to higher degradation in the first stint proved costly for the youngster, who eventually finished 15th.

“When the Safety Car happened it really was the worst possible moment for him (Mostert) because he was then surrounded by people with fresh tyres,” explained Edwards.

“He just got monstered after that and I don’t really think his lap times were representative of his pace at that point. He was just getting gobbled up by people with fresh tyres.”

Winterbottom now leads the championship by 161 points over Craig Lowndes, who finished 17th after tripping over Mostert during the post-Safety Car scramble.

The Race 19 victory was FPR’s fourth consecutive Sunday race success, with Winterbottom having taken the spoils during the 200km races at Winton and Pukekohe, and Mostert winning last time out at Barbagallo.