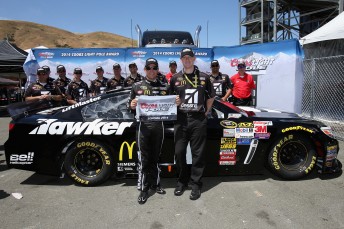 Jamie McMurray for the second-straight year has won the Coors Light Pole for the Toyota/Save Mart 350 at Sonoma Raceway outside San Francisco.

The big surprise of the session was the performance from Australia’s Marcos Ambrose, who will start from 23rd on the first of two roadcourse races of the season.

With tyre wear sure to be a massive issue in the race, Ambrose concentrated on car balance throughout practice; it came at the detriment of a fast qualifying time. With tyre drop-off expected to be high, the RPM driver will be aiming to move through the field in the race.

McMurray’s performance made him the 11th different pole winner of the year and his time was another new qualifying record. In fact 22 drivers went under the previous record held by Ambrose.

AJ Allmendinger looked to have secured pole before McMurray headed out to be the final driver to make his run in the last 10-minute segment. His performance was outstanding after McMurray needed two runs to make it into the final top-12 segment.

“I was a little disappointed that we had to go back out and make another lap to get into the top 12, because I thought that was going to ruin our chances of getting a good spot or sitting on the pole,” said McMurray.

“This knockout qualifying, it’s an emotional roller coaster, from not making it in the top 12 and having to go back out and bump your way in to then being on the pole. There’s a lot of highs and lows that go with that.

“It’s really cool for us to get bumped out and then come back and sit on the pole.”