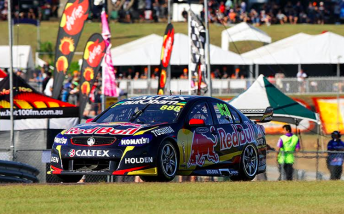 Craig Lowndes has made the perfect start to Sunday’s track action at Hidden Valley, using just one set of soft tyres on his way to pole position for Race 19.

With each driver given two sets of softs to use today, teams were left to choose between doing two runs in qualifying, or keeping one set brand new for the race.

Lowndes put in a stunning 1:08.75s effort on his first set softs, after which he watched the final flurry of times from the Red Bull garage.

Team-mate Jamie Whincup was 0.27s adrift on his first run and then fell 0.09s short of stealing pole on his second.

Michael Caruso and David Wall were the only other drivers that did not complete two soft tyre runs.

Caruso sat out much of the session before going 21st with his lap, while Wall, who had planned two soft tyre runs, failed to turn a flying lap at all due to power steering problems.

Of the 22 who did two soft tyre runs, only Winterbottom and Swede Robert Dahlgren failed to improve with their second effort.