The win is Whincup’s first since Saturday at Symmons Plains in March and follows Red Bull’s first test day of the season in the build-up to the event.

“Both cars were clearly good and we have made some improvements over the mini-break which is nice.

“We had a few up and down rounds and we don’t like doing that. We really put our head down and everyone has done a good job.

“We took a little bit of a risk and it has paid off. There’s still a long way to go but certainly improved from the start of the year.” 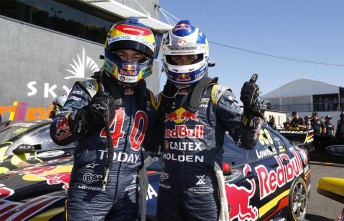 Lowndes moved into second off the start and held the position throughout the race, fending off a determined race-long challenge from eventual third-place finisher Shane van Gisbergen.

Scott McLaughlin had a lonely race to fourth in his Volvo after dropping two places with a tardy start.

Garth Tander and Mark Winterbottom provided the entertainment of the race as they battled for fifth.

Winterbottom hounded his Holden rival from the early stages but, despite pulling alongside Tander in the closing stages, proved unable to find a way through.

Jason Bright, James Courtney and Fabian Coulthard filled seventh through ninth after all benefiting from a late-race mistake from Lee Holdsworth, who dropped to 10th with a rear brake lock-up at Turn 1.

Team-mate Will Davison was the race’s only retirement, falling foul of power steering issues in the early going.