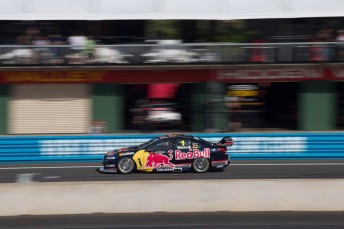 Jamie Whincup and Craig Lowndes eased their way to another one-two finish in Race 18 of the V8 Supercars Championship in Darwin.

In a repeat of the day’s opening 100km hit-out, the Red Bull duo ran first and second for the duration.

Fabian Coulthard kept his points tally ticking along with a comfortable third in another race that was thin on overtaking at the front.

Tim Slade, David Reynolds and Michael Caruso completed the top 10, with James Courtney 11th after falling off the road in the early stages while running fifth.

Winterbottom’s race fell apart at the start, dropping from fourth to eighth as a bad launch was compounded in the push and shove of the opening corners.

Jason Bright was 12th after a mistake dropped him from the top 10 in the closing stages.

Will Davison salvaged 13th for Erebus Motorsport in a race that saw team-mate Lee Holdsworth retire with power steering problems – the same issue that had beset Davison in Race 17.

The issues ensure that both Mercedes-AMGs will have a set of relatively fresh hard compound tyres to use tomorrow, when most are expected to re-use four of their eight Saturday tyres.

Rick Kelly, Todd Kelly and Russell Ingall elected to use their Race 17 tyres in Race 18 in order to save a complete fresh set for Sunday.

The strategy ensured that all three ran at the back of the field, with both Jack Daniel’s Nissans eventually finishing a lap down.

Fellow Nissan driver James Moffat failed to complete a lap after his Altima suffered steering damage in the opening corners.