Nissan under no illusions over practice speed

Nissan under no illusions over practice speed 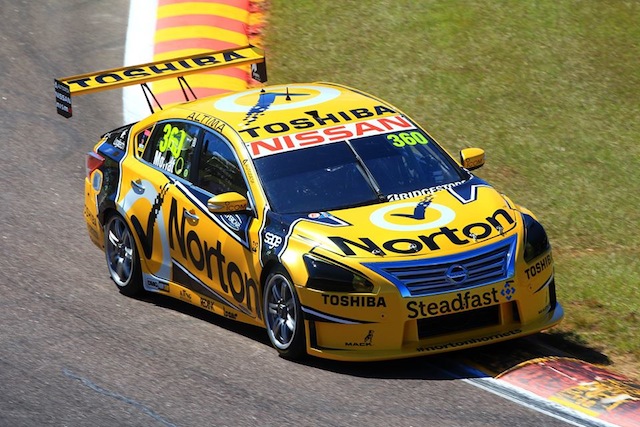 Nissan Motorsport is braced for a tough slog in the Skycity Triple Crown at Hidden Valley despite having all four of its cars among the top 10 on Friday’s combined practice time sheets.

James Moffat led team owner/driver Todd Kelly to a rare Nissan one-two in the second of the practice sessions as the duo each bolted on a set of pre-marked soft tyres late in the going.

They ended the day sixth and ninth on the combined results respectively, while team-mates Rick Kelly and Michael Caruso managed fourth and seventh.

Once all cars are on new tyres in qualifying, it’s expected that the Nissans, which continue to struggle for straightline speed, will find the going tough on a circuit that features a 1.1km front straight.

“We all know that we’ve still got a lot of work to do,” Moffat told Speedcafe.com after practice.

“It was nice for the team to have a couple of cars up there in one of the practice sessions but we’ve got to do it when it counts.

“It’ll be tough in the races and I think probably the hardest thing for us will be that Turn 1 is a good passing opportunity and it’s realistically not available to us.

“Even if we’ve got better tyre grip and can get a better run onto the straight, once you hit fifth or sixth gear, other cars are still going to gain on us again.

“At other places like Barbagallo where there’s big tyre drop-off and we can get past guys later in the stint, it’s going to be difficult here because there aren’t really passing opportunities there for us.”

With its planned cylinder head upgrade now not expected to come until next year, the team is working on another interim head revision in-house at its Braeside workshop which it hopes to have onboard by the start of the Pirtek Enduro Cup.

“It’s frustrating, but the reality is that the way the championship has gone over the last 18 months and with it becoming so close, you need everything at your disposal to get the result,” continued Moffat of the team’s position

“I think the next few rounds will be a little bit hard for us, but there are some things coming along that should hopefully improve the situation.

“We need to keep pushing and have faith in what we’re doing and wait for some of the improvements to come on board and see what that gives us.”

Moffat’s Nissan inadvertently helped Shane van Gisbergen to the fastest time in Friday practice after the Holden driver aggressively bump-drafted the Altima down the front straight on what would prove to be the day’s quickest lap.