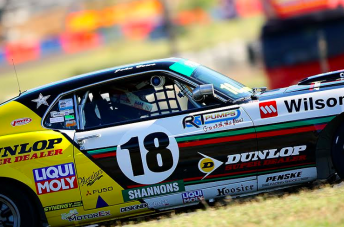 John Bowe extended his winning run in the Touring Car Masters at Hidden Valley by taking a dominant victory in Race 1 of the weekend.

Bowe, who has won all three races at the Darwin round over the last two seasons, led home Andrew Miedecke by a commanding eight seconds.

The Ford Mustang-mounted driver had scored pole position earlier in the morning and walked away with a race lap record some 1.4s faster than his own previous benchmark, set in 2012.

Miedecke had spent the entire race holding out Jim Richards after the Chevrolet Camaro had gotten the better of the Ford Falcon Sprint off the rolling start.

XB Falcon driver Keith Kassulke climbed from his starting position of sixth to finish fourth ahead of Cameron Mason, for whom fifth marked a career best finish.

The result came after Mason’s Ford Mustang broke a castor arm in practice; forcing the team to call upon local help for repairs.

Races 2 and 3 for the TCM will take place at Hidden Valley on Sunday, with the former to feature a reverse top eight grid.