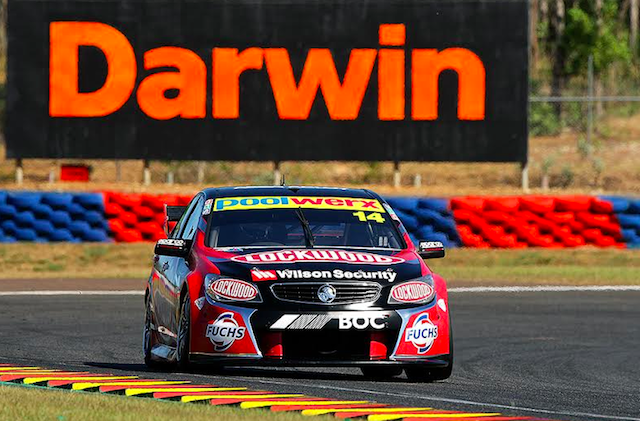 Fabian Coulthard’s Brad Jones Racing Holden will campaign the team’s latest Triple Eight-designed suspension for the remainder of the weekend after a positive diagnosis from the team following practice.

“We ran it and didn’t have any problems with it so we’re going to leave it in for the weekend,” team owner Brad Jones confirmed to Speedcafe.com.

As the squad has only had time to fabricate two sets of the uprights, the Lockwood entry will be the only one of BJR’s three cars to race with the new units, which have been on the Red Bull Racing Australia entries since midway through last year, but are yet to be raced by a customer outfit.

Coulthard topped first practice on Friday morning before falling to ninth and 20th while sticking to hard compound tyres as others used pre-marked softs during the afternoon.

Team-mate Jason Bright was third, eighth and 19th through the sessions after running a similar tyre strategy.

“We came out of the box pretty hard but then everyone starts mixing up what tyres they use, hards and softs, and there was different rubber going down,” said Jones of his team’s day.

“It’s really hard to know where we are, we’ll just have to see where we are in qualifying.

“I think we’ve got very fast race cars. Hopefully we can qualify in a good spot and go from there.”

Added Coulthard. “I was pretty happy with it in the morning morning and then obviously as the day has got hotter we’ve got a bit slower.

“When everyone’s running hards we’ll know where we stack up.”

Coulthard sits third in the championship heading into the opening 100km race of the Skycity Triple Crown.