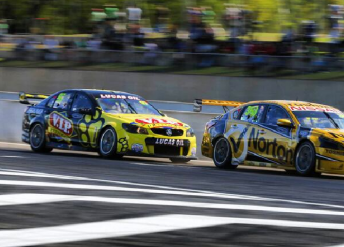 Shane van Gisbergen’s aggressive style was again on display during practice at Hidden Valley as the Tekno Holden driver made contact with James Moffat’s Nissan at 250km/h on the way to the day’s fastest time.

Moffat was left bemused by the extended bout of nose-to-tail bumping on the front straight, which came after Van Gisbergen had caught the Norton-backed entry while on what proved to be his quickest lap.

Van Gisbergen later insisted that there had been no malice in the move, stating that he had been simply chasing the aerodynamic tow from his Nissan rival.

Moffat however was less than impressed, labelling the contact as completely unnecessary in a practice session.

The incident follows a spirited dice between the pair at the Perth 400, where the Kiwi also earnt the wrath of countryman Scott McLaughlin over a separate incident.

“I don’t really know what the deal with Shane is,” Moffat told Speedcafe.com.

“I haven’t really had too many dramas with him over the years but we had a drama in Perth on the Saturday.

“He did catch me in the final sector (today) and I may have messed him up a little bit coming onto the straight.

“I pulled to the left to get out of his way and he chased me to the (inside) wall and he gave me a bit of a hit. So then I thought ‘stuff you mate’, I’m going to go back to the racing line.

“I’d tried to get out of his way and he kept hitting me down the straight, which in practice there’s just no need for.

“He and Scotty had a few dramas at the last round and sometimes I don’t know what goes through his head.

“It’s an interesting one because I don’t really think you need to be driving into the back of cars in a straightline in practice.

“That’s just Shane. He seems to think he can run by his own rules sometimes, so good luck to him.”

Van Gisbergen said that he was “amazed” by the speed benefit provided by the NASCAR-style bump-drafting.

“He was obviously on a different tyre plan,” said Van Gisbergen of Moffat.

“I’d lost a little bit of time behind him in the last sector and out of the final corner there was a tow available so I took it.

“I just pushed him across the line. Two cars are better than one and it was amazing how much speed we picked up.

“There was obviously a little bit of time gain there. I was pulling gears a lot earlier than I was before.”

Having endured his worst weekend of the season last-time out at Barbagallo, Van Gisbergen said he was encouraged by the speed of his VIP Petfoods Holden today.

“We struggled in Perth and we didn’t test between the rounds so we really wanted to put our best foot forward and get some confidence back in our car,” he said.

“It was pretty good all day on old hards. The new hards were great and then the new softs at the end felt great too.

“I don’t know what tyres everyone else was on, probably not new, but it feels good so far.”