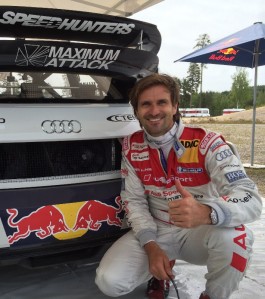 Former Formula 1 driver Markus Winkelhock will join the World Rallycross round in Finland next week as a wildcard.

Winkelhock will drive an Audi S1 Supercar for the EKS RX team beside incumbent Pontus Tidemand.

The FIA GT1 world champion comes in to replace team founder Mattias Ekstrom who contested last weekend’s round in Norway however he has been forced out with a clashing DTM schedule.

“It’s absolutely awesome to be part of EKS and get the chance to drive such an amazing Audi,” 34-year-old Winkelhock said.

“The first test in Sweden was very helpful to become familiar with the car, the starting procedure and so on. I was very happy with these first steps and the team was as well.

“But for sure, for me as a GT driver the race weekend will be a big shift. Nevertheless I’m very thankful to Mattias who gave me the chance to race in World RX.”