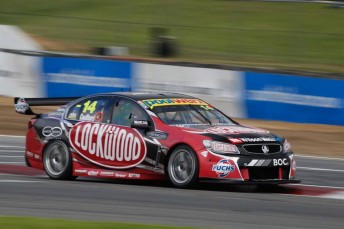 The team has purchased the Intellectual Property to fabricate and race Triple Eight’s fifth generation front uprights, which were debuted by Red Bull Racing Australia midway through last year

The move marks a significant investment from BJR, which had been using the fourth-gen units alongside fellow Triple Eight customers Nissan Motorsport, Tekno Autosports and Lucas Dumbrell Motorsport since the start of 2013.

BJR ran the newer items, which are said to be “a natural evolution” of their predecessors, in Fabian Coulthard’s Lockwood Holden during its pre-Darwin test at Winton.

With each pair of uprights taking approximately a week to fabricate, the team’s stocks remain low, ensuring that only Coulthard’s car is expected to run them today.

Coulthard sits third in points heading to Hidden Valley after a strong run through the opening 16 races that has included one win, 10 top five finishers and two pole positions.

Although the front suspension is one of few areas of design freedom under the Car of the Future regulations, team owner Brad Jones downplayed the importance of the upgrade, saying that his team won’t rush its roll-out.

“We’re still evaluating it,” Jones told Speedcafe.com of whether the upgrade will be raced this weekend.

“At the end of the day I don’t think it’s any great leap forward, it’s just another piece of the puzzle.

“Our intention obviously is to run them on the car, it’s why we bought the IP, but at the moment it’s just the process.

“We’ve put a lot of work into getting them done and we don’t have a lot of them done yet.

“I think we’re going pretty well at the moment so we’re not in a big rush to change anything too much either.

“There’s not half a second in it and what we need to do at the moment is to keep focussed.

“We’ve got fast cars, we’re in that lead group, and we need to concentrate on doing everything right.

“When we do that we can win, so we’re not in a mad rush to do anything too rapidly. We’ve still got a lot to learn so we’re just taking it gently.”

The team had originally planned to make the move earlier in the year, but major crashes for Jason Bright in Adelaide – which required its spare chassis to be hurriedly built-up – and Dale Wood at Albert Park pushed the Albury-based squad’s resources.

“It would have been nice to do it earlier in the season but our focus has been on other things,” continued Jones.

“Repairing cars has been a huge time loss for the manufacturing department at BJR, along with making sure we’ve got enough spares for if it (a car-destroying accident) happens again.

“The crash (in Adelaide) and repairing Woody’s car from the Grand Prix has really exhausted the resources to some extent, so it’s been a matter of getting things happening without costing us in other areas.”

The fact that the front suspension was not made a control item when the COTF rules were introduced last year continues to be lamented by many in the paddock, who see it as an area of unnecessary cost.

Although the issue was again brought forward at a Commission meeting earlier this season, no change to the current situation appears to be on the horizon.

“It’s a really difficult one, (but) I’ve always thought that it should be (control),” said Jones when asked for his personal view.

“I get that some people feel that it’s one of the few areas where we have an ability to engineer the car, but it’s a pretty major cost base.

“The problem for me now is that everyone has spent the money.

“What I’d like to see now is a freeze on what we currently have so that we don’t end up with another design and another and another.

“The Commission is always looking at areas to try and save the teams costs and all you can really do is submit a communique and wait and see what happens with it.

“Anything that costs money often gets looked at, and the front-end is a big cost component.

“But how you fix it once we’ve been through the initial build of the car is not easy and potentially very expensive.

“The teams can’t afford to be caught up spending unnecessarily at the moment. We’re all feeling the pinch.”