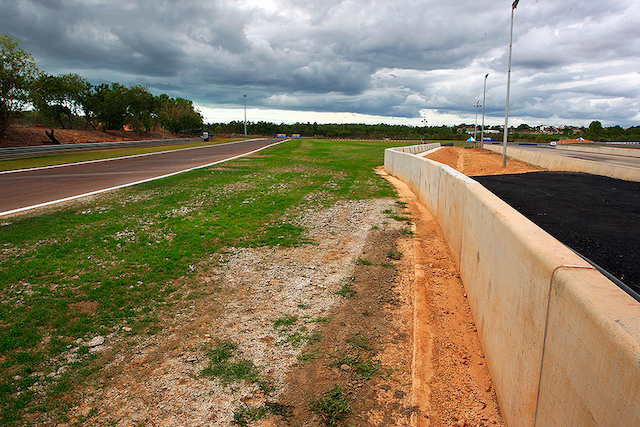 The new concrete wall and extended grass verge, as seen looking back towards Turn 1

As previously reported, the first stage in the Northern Territory government’s $9.5 million upgrade package for the circuit has included replacing the earth filled tyre wall on the inside between the exit of Turn 1 and Turn 4 with concrete barriers.

The move was made after a number of violent multi-car incidents, including that seen at the start of the Sunday V8 Supercars race last year, where cars made contact with the tyre barrier and bounced back out into the path of other cars.

Among many drivers to have suffered at the hands of the previous barrier is current Nissan Motorsport owner/driver Todd Kelly, who all but destroyed a Holden Team Racing Commodore at the exit of Turn 1 11 years ago.

“As strange as it sounds, concrete really is a lot better in that situation than tyres,” Kelly told Speedcafe.com.

“I was one of the unfortunate ones who tested the tyres out and when you get fired into those (tyre walls) it grabs the car quite violently.

“I went in at about a 45 (degree angle) on the front and it grabbed the front of the car and spun it around that quick that it almost did as much damage to the back of the car as the front.

“With the concrete you just glance off and it does less damage. It’s a good improvement.”

The changes also see a greater gap between the track and the wall, giving drivers an increased chance of avoiding an incident entirely.

Track workers have meanwhile improved the kerbing at the back of the circuit, laying a new kerb at Turn 10 and extending the pre-existing kerb at Turn 11.

“Whenever we come to Darwin, they always improve something,” five-time and reigning V8 Supercars champion Jamie Whincup told Speedcafe.com.

“The safety out of Turn 1 is no different and it’s good to come here and see that they’ve added the kerbs around the back of the circuit as well.

“When there were no kerbs there we always had debates in drivers’ briefings about cutting the corners and dragging dirt onto the road.

“It just needed a little bit of extra kerbing and that’s exactly what they’ve done. It’s good that they’ve listened to the drivers.”

Upgrade works at the circuit will continue following the V8 Supercars event, with a full resurface of the 2.9km venue scheduled to commence next month. 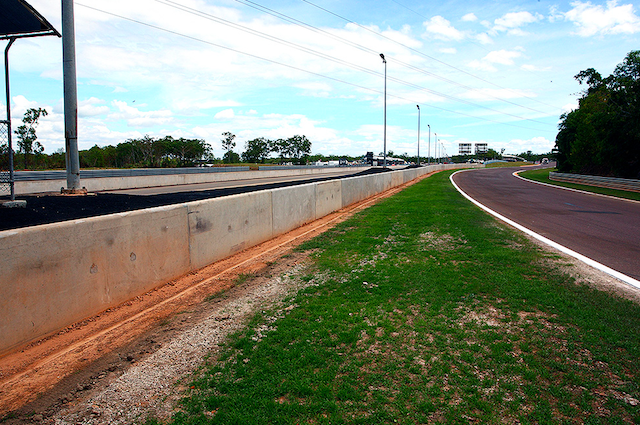 The view looking towards Turns 2-3-4