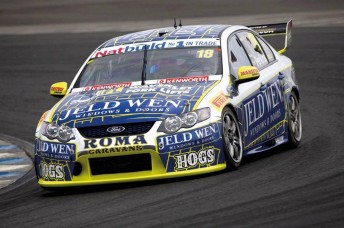 Ceprnich steps into the role normally filled by David Paterson, who is unable to attend the Darwin event due to family commitments.

Through his Queensland-based engineering business, Pace Innovations, Ceprnich designed the Car of the Future V8 Supercars chassis used by all teams since the start of 2013.

The South African native has also race engineered V8 Supercars as recently as last year, where he worked with Matt Stone Racing in the Dunlop Series.

FPR team principal Tim Edwards told Speedcafe.com that recruiting Ceprnich for a one-off appearance is the ideal solution for the team.

“I don’t have any other engineers floating around, we don’t have a surplus stock of them, and when you look around at what you’d call ‘weekend warriors’, he (Ceprnich) is certainly one of the most experienced ones,” said Edwards.

“We know him, so we’ve already got a good relationship, and he’s obviously had a fair bit to do with the Car of the Future.”

The change comes as Perkins attempts to turn around a tough start to his first season with the team that currently sees the #18 Falcon 21st in the championship standings.

The team is hopeful that its recent Winton test, which included championship leader Mark Winterbottom spending time in the Jeld-Wen Ford, will help propel Perkins towards his front-running team-mates.

“I take the view that it’s good to try something different,” said Edwards when asked if the forced engineer switch will prove a disruption to its fourth car.

“It’s no secret that Jack’s struggling, but we had quite a good test and we’ve made quite a few changes to the car for this weekend.

“Time will tell whether they are positive or not, but in terms of the engineering relationship itself, it’s not like they (Perkins and Paterson) had been working together for the last five years.

“Everyone has been talking about the (engineering) change with Jamie (Whincup) this year, but Jack and Patto haven’t got that history.

“The reality is that we all work so closely as a group across all the cars. It’s not just like we’re leaving Cepi to his own devices on that car.

“The rest of the engineers will really lead the way with the technical direction of that car and really the role of Cepi this weekend is the role of car manager.”

Expanding on the task of getting the Charlie Schwerkolt-owned entry further up the field, Edwards stressed that understanding Perkins’ preferences is just as important as the 27-year-old adapting to the car.

“Not every driver is the same and part of it is Jack learning to drive our car and the other part is us understanding Jack a bit more and what he needs from the car,” he said.

“It’s not a one-way street (because) every driver has a different style.

“Frosty drives a bit different to the others and Chaz has come along with his own unique style.

“It’s like anything. Whether you’re racing a car or swinging a cricket bat, it’s not necessarily a right or wrong way.

“The category is so close and if you’re half a tenth off everywhere it makes a big difference,” he added.

“Hopefully we’ve ironed a few of those out.”

Practice for the Skycity Triple Crown at Hidden Valley begins on Friday.