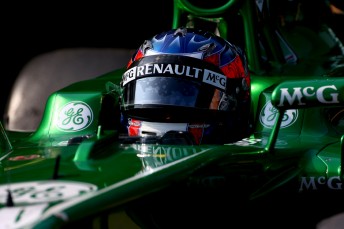 Will Stevens, pictured here during the young driver test from Silverstone last year

English youngster Will Stevens will test drive for Caterham following the British Formula 1 Grand Prix at Silverstone next month.

Stevens will drive the CT05 as part of his inclusion in the Caterham Racing Academy.

After winning the opening race of the season at Monza, the Essex racer is currently fourth in the Formula Renault 3.5 Series.

Stevens has played a key role in the development of Caterham F1 Team’s driver-in-the-loop simulator at his Leafield headquarters.

“It’ll be great to be back in an F1 car for the first time since the 2013 Silverstone test,” Stevens said.

“And with the amount of time I’ve already spent in the virtual car in the simulator, I can’t wait to see how it compares to the real thing.

“I’m sure we’ll have a busy run-plan set for the day and my focus will be on doing the best job I can for the team, building on the work I’ve been doing all year in the sim at Leafield.”

Both Caterhams of Marcus Ericsson and Kamui Kobayashi retired at the recent Canadian GP in Montreal, leaving the squad under pressure after fellow minnows Marussia picked up their first points at Monaco courtesy of Jules Bianchi.