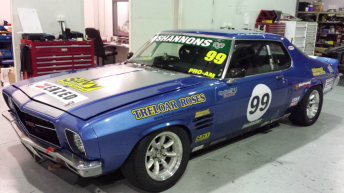 Les Walmsley’s HQ Holden Monaro will return to the Touring Car Masters grid this weekend for the first time since its major accident in Adelaide’s season-opener.

The Holden was heavily damaged in a multi-car accident at the Clipsal 500 in March, forcing Walmsley onto the sidelines for last month’s second round at Barbagallo.

The experienced TCM driver completed a shakedown with the rebuilt car at Winton last week and says he’s expecting it to be stronger than ever at Darwin’s Hidden Valley Raceway.

“I think it’s probably the best car I’ve ever driven and it’s got the best motor I’ve ever had, too,” said Walmsley.

“It has been a huge job by the guys to rebuild the car. Basically everything forward of the fire wall has been replaced and is brand new.

“It’s got new panels, new chassis rails and of course the new engine which was built from the ground up.

“It has just been a huge effort from everyone involved at Savy Motorsport and everyone that supports us.”

The quartet are part of a 28 strong entry for the category’s annual visit to the Top End, dubbed the Shannons Thunder Valley 100.

John Bowe (Ford Mustang) leads Abelnica and Jim Richards (Ford Falcon Sprint) in the standings after a start to the season that has seen five different winners from six races.

Bowe has a strong record in the TCM at Hidden Valley with three rounds and 10 race wins to his credit, but isn’t taking more success for granted.

“I know the Masters will turn on a great spectacle for the fans and as always I’ll do my best and see what comes of it at the end of the weekend.”

The TCM will tackle three races over the course of the weekend, with Races 1 and 3 to be shown live as part of the Seven Network’s television coverage.