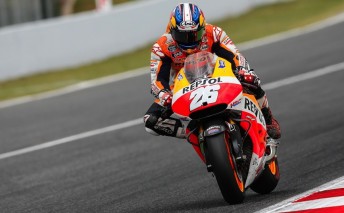 Honda boss Livio Suppo says retaining the services of Dani Pedrosa for next season is a priority for the team.

The Spanish rider is out of contract at the end of the season which has sparked plenty of speculation regarding his future at the Japanese marque.

Pedrosa, who has ridden for Honda since moving up to MotoGP’s premier class in 2006, has been linked with a potential move to Suzuki as they return to the championship next year.

While his reigning world champion Honda team-mate Marc Marquez agreed a new deal until the end of 2016, Pedrosa has yet to declare his 2015 plans.

After finish third following an almighty scrap for the Grand Prix de Catalunya victory at the weekend, Suppo has revealed the team are working on a new deal to keep Pedrosa at Honda.

“For sure, we will speak with Alberto (Puig, manager to Dani Pedrosa),” said Suppo.

“Now we will go ahead, but there is no rush.”

The MotoGP teams returned to the Barcelona’s Catalunya circuit on Monday and Tuesday for an official test.

Marquez topped the timesheets after spending the majority of the day working on electronics upgrades while trialling a new Bridgestone tyre.

Yamaha used the test to develop a new exhaust while testing a 2015 specification engine. Jorge Lorenzo and Valentino Rossi were three and ninth tenths slower than Marquez’s benchmark time.

Suzuki joined the teams as they stepped up their preparations for their 2015 championship return. Test riders Randy De Puniet and Takuya Tsuda carried out work developing engines and chassis setups.

Ducati and Suzuki are due to conclude their test today.