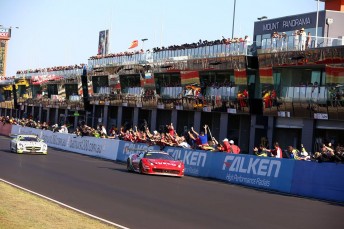 Network Seven will broadcast the Bathurst 12 Hour live in its entirety next year under a new deal announced today.

The coverage will be split between 7mate and the main Seven channel, with “at least the final three hours” to be broadcast on the latter.

The race’s start time will be brought forward from 0600 to 0555 in order for the the finish to occur before Seven’s evening news bulletin.

The move marks a major increase in television exposure for the race, which enjoyed live free-to-air coverage for the first time this year through a three-hour package on SBS.

The February event will kick-off a year for Seven that sees it without the V8 Supercars Championship for the first time since 2006.

“We are delighted to be partners with the Bathurst 12 Hour. We have a long and deep association with Mount Panorama at Bathurst,” said Saul Shtein, Seven’s Head of Sport.

“We are focused on building our presence and leadership in major sports across our broadcast television platform and we are looking forward to working with the Bathurst 12 Hour, its partners and the teams to deliver all-encompassing coverage from one of the great motor racing circuits in the world.”

Event Director James O’Brien said the new partnership with Seven highlighted the growth the event had experienced in recent years.

“It is a great vote of confidence that the leading free-to-air TV network in Australia is willing to broadcast live the entire 12 hours of the Liqui-Moly Bathurst 12 Hour,” he said.

“This is a major boost for our partners, sponsors, supporters and competitors who will receive network television airtime around Australia and for our fans, who will be rewarded for their loyalty to the Event with unparalleled coverage.

“Having the entire 12-hours showcased live on free-to-air network television is rare in the world of endurance racing and we are excited to be able to offer this level of coverage from 2015.

“‘Australia’s International Endurance Race’ is growing rapidly and our partnership with Seven is a reflection of that.”

Although details are yet to be confirmed, the race will continue to be streamed live via the internet alongside the Seven coverage

The English Radio Le Mans commentary team is also expected to return, with Seven likely to use a combination of the internationals and local talent for its broadcast.

The coverage will again be produced by Sydney firm AVE, which is best known for its work on SBS’ Speedweek.