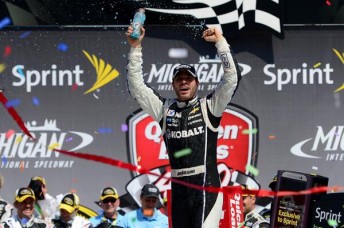 Jimmie Johnson has notched his third win of the season and for the first time in his career taken victory at Michigan International Speedway.

In a race that featured mixed strategies, and at times longer green flag runs, Johnson moved into a position to win the race when he made his final stop with 35 laps to run. While others tried to stretch their fuel, the race stayed caution-free and the six-time champion was at the front when the chequered flag fell.

In terms of Johnson’s career at tracks where he is yet to scores wins only Chicagoland Speedway, Homestead-Miami Speedway, Kentucky Speedway and Watkins Glen International remain on the list.

The result was the fifth-straight weekend that a Hendrick Motorsports car has won after Dale Earnhardt Jr. win last week at Pocono, Johnson took the preview two races at Charlotte and Dpver, and Jeff Gordon was the victor in Kansas.

“We’ve figured out every way to lose this race and today we were finally able to get it done,” said Johnson.

“For so many years, my dad was here at the track, and I wanted to win this race for him. He’s in upper Michigan this weekend, so dad, we did it — finally. And as a dad, it tickles me deep to win today. I don’t want to get old but I look forward to that day.”

Strong winds throughout the race caused a number of issues, including the opening lap when Brian Vickers and Travis Kvapil crashed.

One driver who battled to get a handle on his car and the conditions was Marcos Ambrose. The Australian had car balance issues throughout the race and finished in 26th position. Ambrose is now looking forward to next weekend and the first of the season’s two roadcourse races at Sonoma outside San Francisco.