Aston Martin Racing paid tribute to former driver Allan Simonsen after taking the GTE Am class victory at Le Mans a year on from the Dane’s death.

The result came despite a late power steering scare for the #95 Young Driver AMR entry.

Steering issues had earlier taken its sister #97 and #98 Vantages out of contention in the GTE Pro and AM classes respectively.

The #95’s success proved a fitting tribute to Simonsen, who was killed in a single-car accident during the opening minutes of the 2013 race.

“We raced in the spirit of Allan Simonsen and I think we really did him proud,” said team owner Jan Sturve post-race.

“This victory is for him.“

Poulsen had been sharing the Young Driver entry with Simonsen last year and admitted to doubting whether he should have returned to the French circuit following the accident. 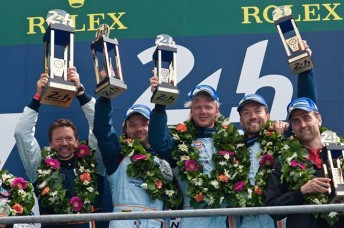 The AMR crew celebrates on the podium

“To return to Le Mans this year was especially tough for the team and everybody who knew Allan,” said Poulsen.

“After last year, I wasn’t sure I would ever come back and after my first laps on this track, I thought it was a bad idea to return to Le Mans.

“But then we got with it and said we go out and win this race in the spirit of Allan.

“This victory goes to Allan and we will never forget him.”

Thirty-four years old at the time of his death, Simonsen had carved out a successful GT career in Europe and Australia.

His time in Australia had also included regular outings in the V8 Supercars endurance races and a season in V8 Utes.