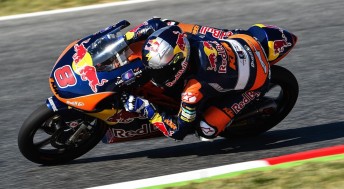 The 19-year-old produced a stunning final lap at the Barcelona circuit to move from eighth to fourth as the Townsville rider just missed out on a podium finish.

Miller struggled for outright pace throughout the weekend but the Red Bull KTM rider, who started from ninth on the grid, still managed to salvage a strong fourth place to extend his championship lead.

“All weekend, and also a little at Mugello, I noticed that I had some chattering with the bike, especially when changing direction on the two fast corners at the end or at Turn 3,” said Miller.

“I couldn’t turn the bike in and open the throttle when I wanted to. But I’m happy to come here, finish fourth and concede the least amount of points possible.

“Until the last lap I was confident that I could pass, but I did not think that I could get up to fourth place, so I’m happy about that.”

The Moto3 championship heads to The Netherlands for round eight at the famous Assen circuit on June 28.