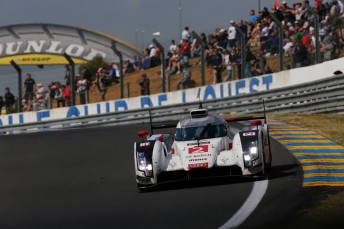 Audi continued its phenomenal Le Mans record with yet another victory

The #2 R18 e-tron of Marcel Fassler/Andre Lotterer/Benoit Treluyer led home the team’s #1 entry of Lucas di Grassi/Tom Kristensen/Marc Gene by three laps in a one-two finish for the German marque.

Mark Webber’s Porsche failed to see the chequered flag after suffering from a terminal drivetrain failure while running a close second with just two hours remaining.

The demise of Webber’s car was the final in a series of dramatic twists among the top runners, which all suffered from varying degrees of technical issues.

Porsche, Audi and Toyota each had a car effectively taken out of contention within the opening two hours.

The pole-sitting #7 Toyota dominated for the opening 14 hours before an electrical fire saw it instantly eliminated from the fight.

That left the #20 Porsche to fight the much faster #1 and #2 Audis for the remainder of the race.

The #20 entry ground to a halt on the Mulsanne not long after Webber took over the car for the run to the flag and, although the Australian was eventually able to drive the car to the pits, it did not return to the circuit thereafter.

More problems for the #14 Porsche late in the going eventually allowed the #8 Toyota to assume the final podium spot, just two laps adrift of second.

The #12 Rebellion was a further 14 laps down in fourth, while the LMP2 winning #38 Jota Zytek-Nissan also benefitted from the attrition to score fifth outright.

The GTE Pro honours were taken by the #51 AF Corse Ferrari, which took a decisive advantage on Sunday morning when its long-time rival, the #97 Aston Martin, lost five laps with a power steering problem.

Aston instead had to be content with the GTE Am spoils, where its #95 Vantage survived a late power steering scare of its own to beat home its Porsche and Ferrari opposition.