Tigani sets the pace as Championship hunt heats up

Tigani sets the pace as Championship hunt heats up 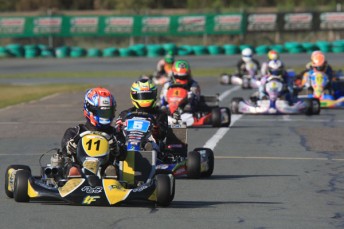 New South Welshman, Nathan Tigani has been the pace in KF2 at the opening day of the third round of the Castrol EDGE CIK Stars of Karting Championship at Puckapunyal (Victoria), recording three heat race wins.

Whilst Tigani was clear of a class full of talent in the Castrol EDGE Championship’s first visit to Puckapunyal, Championship leader, Troy Loeskow had a difficult day at the office. The Bundaberg FA Kart racer scored a fourth in the opening heat, but then battled through heat two and in the third heat was forced to the sidelines, costing him valuable Championship points.

Local, Leigh Nicoloau put his Arrow on the pole and is mixing it among the top group.

The Harrington Doyle Racing Arrow karts of round one winner, Scott Sorenson and Jarryd Ebzery have shown speed, so too Kosmic Racing’s Joshua Smith, whilst defending Champion, Matthew Waters is mired in the mid pack.

In the KF3 Junior category, it was Andrew Kahl who showed superior pace yet struggled to convert that over to a heat win. The opening heat he had an issue on the final lap while well in front, overcome by Jayden Ojeda, then Christopher Sandrone and round three winner, Zane Morse secured the remaining heats.

In an action-packed opening to KZ2, it was nothing but drama filled for the Freem Racewear pole man David Sera in his Deadly kart. He didn’t start heat one, suffered from a bent chassis in heat two, but bounced in true form despite the drama to take the final heat win.

Others to impress included round one winner, Kyle Ensbey who has bounced back to form in his Maranello Kart, WA-based Englishman, Darren Burke, last round winner, Jason Faint and CRG’s Jason Pringle.

Series leader in TaG Light, Daniel Rochford continued his excellent run making his way forward in each race despite a poor qualifying position and in TaG Heavy, Aaron Hindle and undefeated Series leader, Brendan Nelson are going at it, sharing the heat race wins.

In the support categories, it was Queenslander Jack Doohan and Sunbury’s Justin Ford who managed to convert their pole positions and take out the opening heats of Rookies and TaG Restricted respectively.

A pair of finals in all three Castrol EDGE CIK Stars of Karting Championship classes will take place tomorrow, along with pre-finals and finals for the other classes.

To view the preview panel show recorded at the end of Saturday’s racing and the live streaming of Sunday’s finals, that will be streamed live and exclusive around the world, visit www.speedcafe.com/kartinglive.