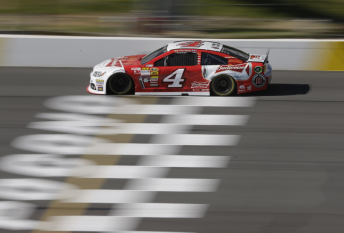 Harvick was the fastest man in NASCAR since 1987

Kevin Harvick has scored his third pole position of the season with a new qualifying record at Michigan.

Harvick’s lap of 329.203 km/h (204.557 mph) is the fastest qualifying speed in the sport since prior to restrictor plates being introduced for Daytona and Talladega in 1988.

“Every week the cars are fast, and you’re able to be competitive,” said Harvick.

“You can leave with your head up knowing you’ve got the speed to contend for wins and poles. Monday morning, you have to forget about winning or losing.”

In a good sign for Chevrolet, five Hendrick-powered cars featured in the top 10 with Jeff Gordon set to line-up alongside and Dale Earnhardt Jr. in third.

The first non Chevy is the Ford of Aric Almirola who will start from fourth, while his Australian team-mate Marcos Ambrose will take the green flag from 20th.

“I feel really good about our car, but we just got a little tight during that second round and just couldn’t quite put a lap down,” said Ambrose.

“I certainly feel more comfortable than I have the last few weeks, so I think we’re in for a decent race.

“The track is wide and it’s really smooth.  They’ve done a fantastic job with the facility and I know on the clock we’re 215-plus into turn one but it doesn’t feel like it.”

After switching back to IndyCars this year, Juan Pablo Montoya is making selected appearances in NASCAR with Penske. He will start from 28th.

“For me it’s more of an opportunity to maybe win a race or two here (Penske),” said Montoya.

“They always excel here and have a car that can win, and the way Team Penske is running right now, if it clicks from the beginning, and we hope it does, we might have a shot at winning this.

“And then going to the Brickyard is a place that I run really well. When we ran bad we were always in the top 10, so going there in a car like this you’re definitely looking at a shot at a win as well.”

44 cars turned up to qualify with Ryan Truex the driver who was not fast enough to make the race.