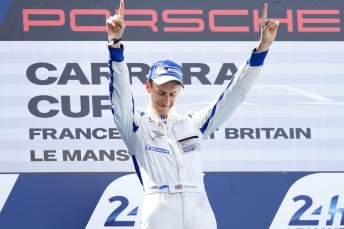 Ben Barker surged to victory in the French Carrera Cup race that was run as the curtain-raiser to the Le Mans 24 Hour.

Polesitter Kevin Estre had continued to lead well into the 45-minute race despite making contact with Kiwi Earl Bamber, forcing the latter to stop with a puncture.

Estre soldiered on, eventually crossing the line in 20th.

Laurent Aiello, part of Porsches outright winning line-up in the 24 Hour in 1998, produced a super drive to finish fourth after starting 14th.

Among the 61-car field, which combined the French and British Carrera Cup races, were Australians Stephen Grove who finished 25th while Marc Cini finished 29th after starting 38th and 47th respectively.

The father of European F3 front-runner Alex Lynn took charge of the race after the opening laps to beat a hot field of Group C racers from the 1980’s and 1990’s.

The race was also scheduled to see Australian Paul Stubber run his Lola T711 powered by a 6-litre Corvette engine which was built by Eric Broadly in 1984, however he did not start after an incident in qualifying.