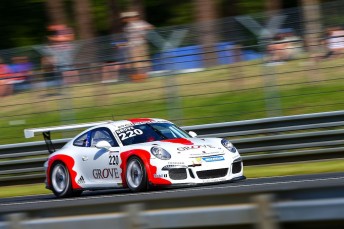 The Le Mans rookies are running in the bumper 61-car field which has combined the French and Great Britain Carrera Cup fields for a 45-minute curtain raiser to the time-honour La Sarthe marathon. Grove clocked the 14th fastest time in Class B and 38th outright time to be 7.8s behind the pole-winner at his first taste of the 13.6km circuit.

The one-off merging of the French and British Carrera Cup fields for the special race is designed to celebrated Porsche’s return to the top prototype bracket of competition at the 24 after last appearing in P1 when it finished 1-2 in 1998.