Erebus to pay tribute to Sir Jack in Darwin

Erebus to pay tribute to Sir Jack in Darwin 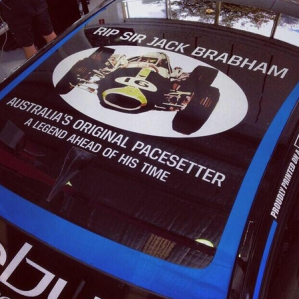 The pair of Erebus E63s will be adorned with tributes to Australia’s greatest racing driver, Sir Jack Brabham, at Darwin’s SKYCITY Triple Crown 400.

A sticker depicting the three-time world F1 champion Brabham in his famous BT19 will stretch across the roofs of Will Davison and Lee Holdsworth’s Mercs at Hidden Valley.

Commemorating Brabham as; ‘Australia’s original pacesetter – a legend ahead of his time’, the tribute comes after the humble giant was laid to rest following a state funeral on the Gold Coast.

Sir Jack’s youngest son David Brabham had a close association with the squad having co-driven for the outfit several times when it operated as Stone Brothers and again last year at the Gold Coast 600.

Erebus general manager Ross Stone and its team manager David Stuart and Will Davison’s engineer Luke Mason all attended the Sir Jack’s service at the Southport Church of Christ.