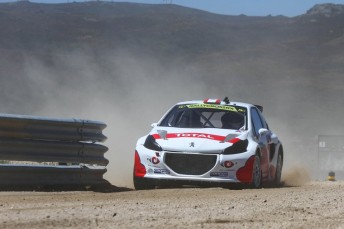 Jacques Villeneuve will take over Albatec Racing’s sister entry for this weekend’s third round of the FIA World Rallycross Championship after rolling his car in testing.

The former Formula 1 world champion severely damaged his Peugeot 208 when he rolled while testing at Sweden’s Holjes circuit on Wednesday. The incident occurred towards the end of the test.

Such was the extent of the damage incurred to the 208 supercar, the team are unable to make the necessary repairs in time for this weekend’s World RX meeting at Hell, Norway.

As a result, Albatec boss and fellow competitor Andy Scott has decided to surrender his car to the French-Canadian for this weekend’s meeting.

Villeneuve missed the last round of the championship at Lydden Hill due to his Indy 500 commitments, which saw the former event winner finish the iconic race in 14th position.

The 43-year-old endured a difficult debut in the series after missing out on a finals berth at the opener in Portugal last month.

Double DTM champion Mattias Ekstrom will join the field in Norway as he makes his World Rallycross debut driving for his own EKS RX outfit.

“The aim of this project is to become world champions,” said Ekstrom.

“I have also never been to a FIA prizegiving before so that would be pretty cool.

“It’s always nice to have some experience from other sports – I have learned a lot from other disciplines and it’s nice to now be part of a new World Championship from the start.”

World rally driver and Youtube sensation Ken Block will also make his first appearance in the series in his Hoonigan Racing Ford Fiesta.

*Stay with Speedcafe.com for all the latest from the third round of the World Rallycross Championship