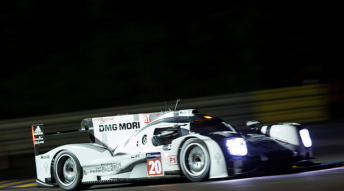 Kiwi Brendon Hartley struck a crucial opening blow for Porsche by leading the factory 919s to a quinella in the first qualifying run for the Le Mans 24 Hour.

Hartley reeled off a 3:23.157s lap to put the #20 919 on provisional pole ahead of tomorrow’s final qualifying session.

Sharing the 2-litre, V4-powered hybrid with Mark Webber and Timo Bernhard, Hartley’s rapid tour saw him almost a full second up on the #14 Porsche driven by Neel Jani which had a hampered run with hydraulic gremlins.

“To be honest I was quite surprised to see my name on the top,” Hartley said.

“In any case it’s nice to be on the top for the moment.”

Although his run had been interrupted by yellow flags, Webber gained confidence with more laps in the car, which built on his experience at the pre-event test two weeks ago.

“I didn’t catch the smoothest window for my run in qualifying,” said the Australian.

“The yellow flags were not great for the rhythm, but we have made good progress with the car since free practice, and I feel more comfortable in it than I did at the pre-race test.

“I have just had my first experience of driving at night in Le Mans for 15 years and I’m looking forward to getting more of this.”

The #7 Toyota of Alex Wurz, Stephane Sarrazin and Kazuki Nakajima was third in 3:25.313s, a tenth up on the #8 practice-topping Toyota of Anthony Davidson, Nicolas Lapierre and Sebastien Buemi.

Audi’s checkered start in the build up to the weekend race following the massive shunt suffered by Loic Duval saw the two remaining R18s finish fifth and sixth, a second behind the Toyotas.

The pair of Toyota-powered Rebellions were seventh and eighth with the #26 OAK Morgan-Nissan driven by Oliver Pla topping LMP2 with the ninth overall time in 3:38.843s.

Gianmaria Bruni put the AF Corse Ferrari 458 at the head of the GTE Pro class with a 3:54.754s lap, just shaving the Aston Martin Vantage of Stefan Mucke.

Qualifying came to a premature end, declared 30 minutes before the scheduled checkered flag after the crash at the Porsche Curves of the Craft-Bamboo Aston Martin at the hands of Fernando Rees.