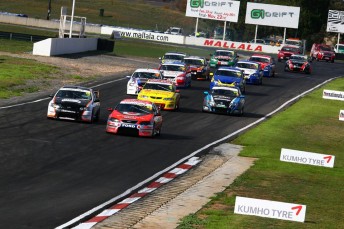 Kumho V8 Touring Car Series organisers have re-affirmed intentions to keep the category’s current model eligibility rules until the end of next season.

The move comes amid continued calls to allow VE model Holden Commodores and FG Ford Falcons into the class a year earlier than scheduled.

The newest models currently permitted are the VZ Commodore, which last raced as Holden’s front-line V8 Supercars weapon in 2006, and the BF Falcon, which was superseded by the FG at the end of 2008.

The Kumho Series’ planned progression to VEs and FGs in 2016 coincides with V8 Supercars’ intentions to allow Car of the Future specification cars into its second-tier Dunlop Series.

“We have maintained for the last few years that we will allow in the newer cars in 2016 and there has been constant pressure to bring it forward to 2015,” said Kumho Series administrator Rob Curkpatrick.

“Understandably, that mainly is coming from teams wanting to get rid of their old cars from the DVS or from individuals who aren’t currently competing in the Kumho Series.

“It has been tempting to bring it forward but we have to be fair to those who are supporting the series and have recently invested in BF Falcons and VZ Commodores.

“A change to later model cars will certainly create a lot of interest, but we are holding firm on our position.

“We think it is the right way forward and when V8 Supercars make a change to the cars competing in their Development Series, the timing works well for the natural flow-on of cars no longer eligible in that series to find a new home in the Kumho Series.”

Round 2 of the 2014 Kumho season takes place at Winton as part of this weekend’s Shannons Nationals event.

Just 10 cars, the category’s smallest field in recent seasons, are set to face the starter at the rural Victorian circuit.

The line-up is headed by points leader Ryan Simpson, who is aiming for a fifth consecutive round win in the class aboard his ex-Triple Eight Falcon.

Former series winner Tony Evangelou returns to the class at Winton aboard the familiar 501 Performance-run ex-FPR Falcon, while Aaron Tebb steps into the ex-HRT Commodore that Stephen Voight recently purchased from Matthew Hansen.