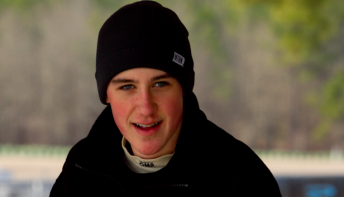 Austin is a rising star in his native United States, splitting his 2014 season between the Cooper Tires USF2000 Championship and a part-time Global RallyCross Lites program.

The V8 Supercars test took place on Wednesday in Matt Stone Racing’s #35 Ford, which is usually campaigned by Todd Hazelwood.

It is understood that the hit-out was organised by Tim Cindric as a reward for his son’s efforts combining his racing with ongoing schooling.

The car was run by MSR mechanics at the test, while Austin was coached by Dick Johnson Racing co-driver Steven Johnson and sporting director Campbell Little.

“Lots of fun and lots of power, thanks to MSR for the opportunity.”

Incredible time testing @v8supercars in Australia! Lots of fun and lots of power, thanks to MSR for the opportunity pic.twitter.com/gti14o2qBT

Tim Cindric is in Australia for the latest meetings on Penske’s planned entry into V8 Supercars, which is thought most likely to occur with DJR.

As revealed late last month, Penske’s talks with DJR could see the American racing giants represented in the V8 Supercars Championship as early as October’s Bathurst 1000.

Although reportedly impressing at the Queensland test, it appears highly unlikely that Austin’s open-wheel career path will see him play a role in Penske’s V8 Supercars plans.