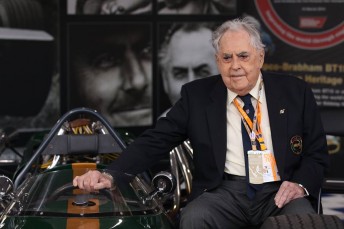 An “amazing feel for anything mechanical” was the main reason Sir Jack Brabham was able to survive the dangerous world of grand prix racing during the 1950s and 1960s, believes son Geoff Brabham.

Geoff, whose own achievements have included victories in the Le Mans 24 Hours and Bathurst 1000, spoke at length about his late father in an extended address at today’s funeral service on the Gold Coast.

The speech included several anecdotes describing near-misses that his father survived on the race track and in his plane, which was used to transport the Brabham family between Formula 1 races in the 1960s.

CLICK HERE for the full transcript of Geoff Brabham’s tribute

“In my opinion, dad’s greatest gift was his amazing feel for anything mechanical, whether it was flying or driving a race car,” explained Geoff Brabham.

“Yes, he would push the limits, but he always had that feel of where the limit was on any given day. It was the main reason he stayed alive when so many didn’t.

“A good example of his feel and how dangerous it was back then, was in 1957 Cooper took a streamlined car to Reims in France for an F2 race.

“Dad did a few laps and decided he did not like the feel of it and went back to the normal open-wheel car, probably because they had no knowledge of aerodynamics at all back in those days.

“Another driver, Bill Whitehouse, had a problem with his car and begged dad, Roy Salvadori and John Cooper to drive the streamlined car, which he eventually did.

“I asked dad ‘how did he go?’ and dad just shrugged his shoulders and said ‘well the car flipped and he killed himself’. There was also another driver killed in the same race.”

Brabham added that driving well-engineered race cars also contributed to the longevity of his father’s career.

Having won his first two world titles in British Coopers, Sir Jack famously partnered with Australian engineer Ron Tauraunac to build his own cars for a variety of open-wheel championships.

“If you wanted to win and have confidence the car would not break, then there was only one choice, and that was to buy a Brabham,” continued Geoff Brabham.

“Dad hardly had any mechanical failures in his career. In fact I’ve had way more than he did.”

Geoff is part of the dynasty that has followed Sir Jack’s success, which also includes brothers David and Gary, and now grandsons Matthew and Sam.

Geoff, who is now based in the United States to look after Matthew’s burgeoning open-wheel career, spoke openly about life as the son-of-a-world-champion.

“It is a myth that myself, Gary and David had some sort of advantage having a world champion as a dad to help us when we first started to race,” he said.

“The only advice dad ever told me my whole career was the first time I drove a race car and he said ‘there’s the throttle, the brake and the steering wheel and if you crash, don’t come back’.

“There was no data back then, dad just felt that you’re either quick enough or you weren’t. It was as simple as that.

“He felt any fool could drive a race car but very few people could actually race a race car and there’s a very big difference.

“I believe all he said to Gary was keep it off the green stuff and the words of wisdom to David were ‘to go fast you need less brake and more throttle’.

“Today there are many tools available to help athletes reach their potential faster. But I agree with dad when he said ‘if you’re not good enough, that’s just the way it is’.”

“I think he gets more excited about his grandchildren Matthew and Sam racing than myself, Gary or David,” explained Geoff.

“He was immensely proud when Matthew and Sam started winning races and could not wait to get the next race report that we always used to send him.

“It gave him an interest and something to look forward to which I think was something really important and great to see.”

Today’s state funeral was scheduled such that all three sons and six grandsons could attend.

“It was a pretty special day to be honest with you,” David Brabham, also a Le Mans and Bathurst winner, told Speedcafe.com after the service.

“To see so many people and so many of the racing greats which Australia have got all turned out… I thought the service was nicely done and it just made for a really great day and a great send off for the man.

“He touched a lot of people in many ways, not just as a family but in terms of friends and colleagues. He made quite an impact in everybody’s life.”