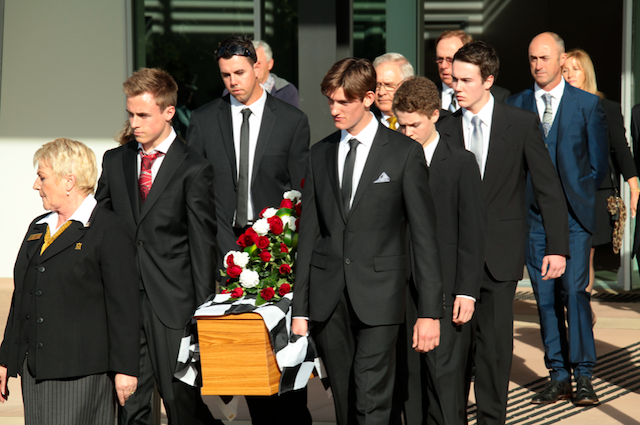 Australia’s greatest motor racing driver, Sir Jack Brabham, was given a farewell befitting his champion status at a state funeral held on the Gold Coast.

Hundreds of mourners crammed into the Southport Church of Christ to pay their final respects at the Queensland state funeral service for Sir Jack Brabham.

The final journey for Brabham was marked with a service celebrating the rich and astonishing life of a pioneer, engineer and racing driver par excellence.

A cross section of motor racing figures crammed the church only a handful of kilometres where Sir Jack had resided with his wife Lady Margaret for the last 20 years.

Honorary Consul of Monaco Andrew Cannon delivered the eulogy, while eldest son Geoff, on behalf of brothers David and Gary, offered insights into growing up with a world champion father. His speech included several humorous tales from during Jack’s grand prix days right up until his final years.

Racing grandsons Matthew and Sam spoke about how Jack had helped inspire them to continue the Brabham motorsport dynasty, before leading the casket out of the church.

Ron Tauranac, the man Brabham enticed to move to England in the early 1960’s and who would help design and build an era of grand prix cars, paid his final respects to his former boss.

Former and current V8 Supercars team owners Ross Stone and Roland Dane, as well as Erebus team manager David Stuart, were among others in attendance.

Australian F1 engineer Ralph Bellamy who moved to England to work for McLaren and Brabham in 1960s made the trip from his English home to pay his respects.

Queensland Premier Campbell Newman offered his condolences to the family before going on to describe how Jack will be remembered as one of Australia’s true greats as his legacy continues to inspire the next generation.

Prime Minister Tony Abbott, who was unable to attend the funeral due to his commitments in North America, sent a personal message to Lady Margaret which was read to the mourners.

His feat to claim his third F1 world title in 1966 in a car of his own manufacturer, the Repco Brabham BT19, is an achievement which is unlikely to be repeated.

Brabham’s death leaves just John Surtees (1964) and Sir Jackie Stewart as the only living F1 world champions from the 1960’s with the former now the oldest living champion at age 80.

VIDEO: Speedcafe’s report from the funeral