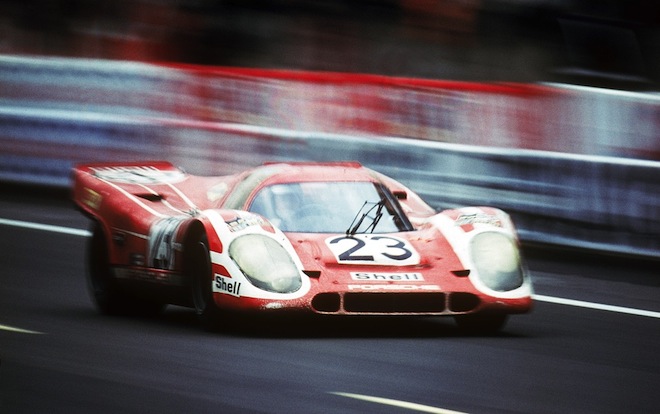 Porsche has mastered the art of conquering the world’s most taxing car race.

After first taking the plunge at Le Mans in 1951, it would be another 19 years before the Zuffenhausen manufacturer took the chequered flag first.

As Porsche returns to chase further Le Mans 24 Hour success this weekend after last competing for outright honours when it finished 1-2 in 1998, Speedcafe.com looks back on its record 16 successes to date.

The new engine would accelerate the 917 to speeds just below 400 km/h – a huge challenge for the aerodynamicists at Weissach.

At Le Mans, the 917 leads at his first outing in 1969 until three hours before the finish – only to retire with clutch failure.

Porsche returns in 1970, and this time yields success. The 917K brings home the first outright win for Porsche.

Hans Herrmann and Richard Attwood share the cockpit of the racer with its aluminium space frame under its thin plastic bodywork.

In the sports car world championship, Porsche secures the title thanks to the seven wins of the now-dominating 917. 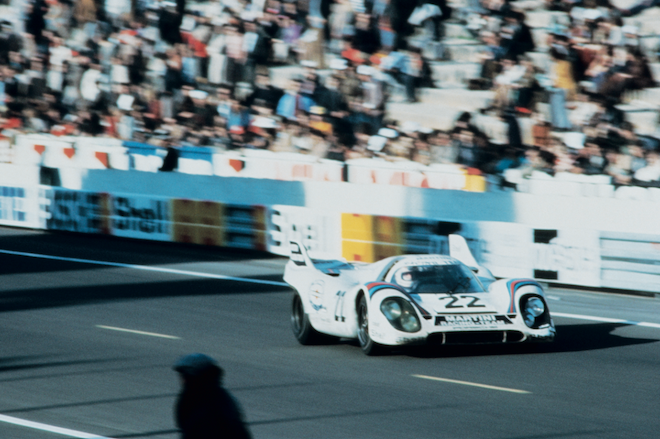 It featured an ultra light magnesium frame which proved to be a third lighter than its aluminium counterpart.

Thanks to the lighter space frame construction, Porsche was able to specifically place ballast to lower the car’s centre of gravity.

The displacement of the air-cooled 12 cylinder increased by 400cc to 4.9-litres so that the engine now delivered a reliable 600hp. 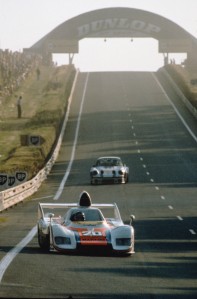 New for Le Mans were the shark fins at the rear that had already been used in Monza which improved the directional stability at extreme speeds and reduced the drag by 11 percent, which resulted in lower fuel consumption and higher top speeds.

Van Lennep and Marko won with a record distance of 5335.16km and an incredible average speed of 222.30km/h. Both records stood for 39 years.

The first race-worthy Porsche 936, called the ‘black widow’ within Porsche because of its matte black body, conducted tests in the second half of February on the southern French race course in Le Castellet.

Participation in the Le Mans 24 Hours was rewarded in June 1976 with a convincing overall victory for Jacky Ickx and Gijs van Lennep. 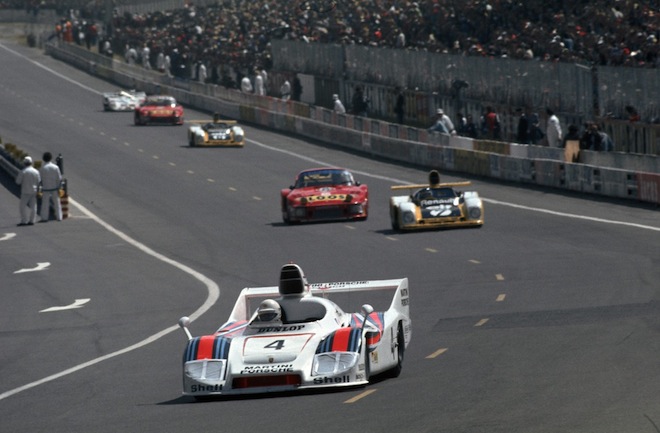 At one of the most dramatic races in history, Jacky Ickx, Jürgen Barth and Hurley Haywood triumphed against four Renault works machines and two factory-backed Renault powered Mirages. 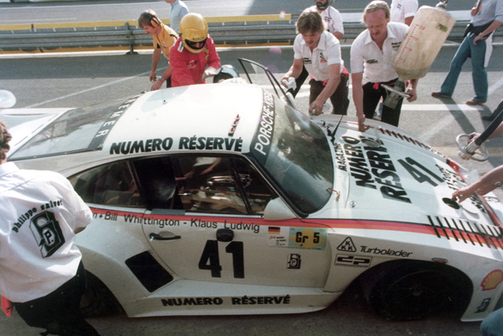 Driven mainly by Klaus Ludwig, it won the 24 Hours of Le Mans in 1979, beating all prototypes, in heavy rain, which is usually considered a disadvantage for race cars with windshields. 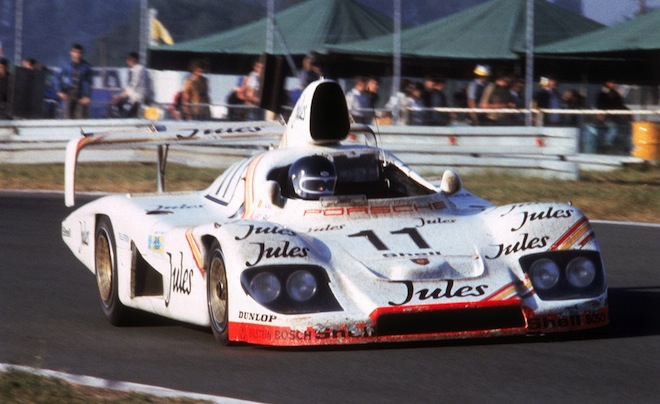 Porsche combined the larger capacity turbo-charged six with the four-speed gearbox from the Can-Am 917.

The 936/81 Spyder of polesitters Jacky Ickx and Derek Bell controlled the race, claiming a 14-lap victory to start a remarkable stretch of domination for Porsche. 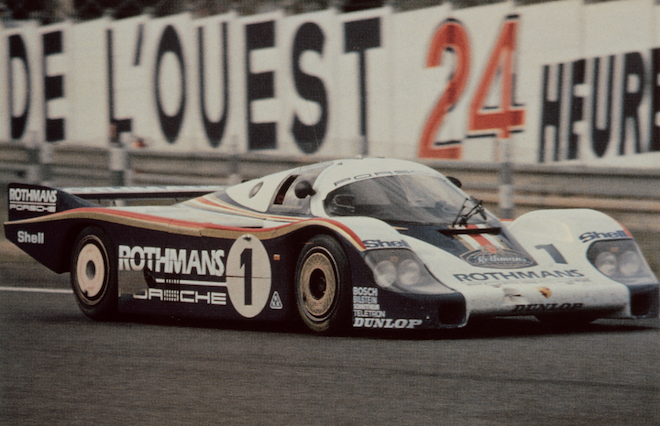 The first race car to feature an aluminium monocoque chassis, the 956 used the same 2.65litre twin turbo engine as the 936 however everything else was new. 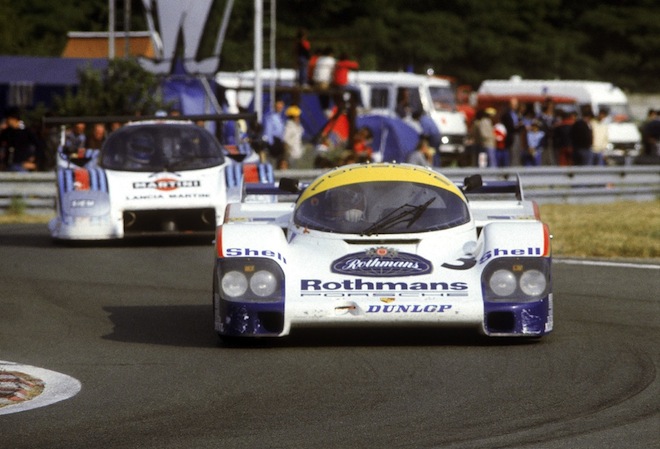 Porsche moves to make the 956 available to customer teams with the model taking a stranglehold on the top 10 placings after 24 hours. The only non-956 was the ninth-placed Sauber-BMW.

Aussie Vern Schuppan, Al Holbert and Hurley Haywood took the win. It was not all smooth sailing with the winning car losing a door during the race which disrupted the air flow and impeded cooling to a cylinder bank. 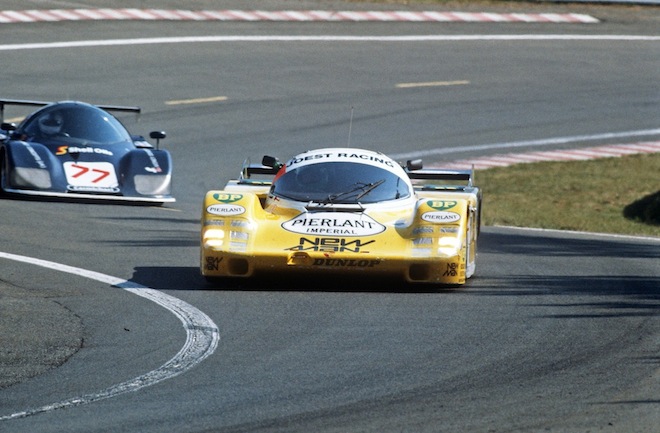 The Porsche factory chooses not to compete after the belated rule change announcing a 15 percent fuel reduction.

Porsche set about optimising the engine then two months before the race the rule change was rescinded.

In the race Klaus Ludwig and Henri Pescarolo win in Joest Racing 956 which had beaten another customer-run 956 by two laps. 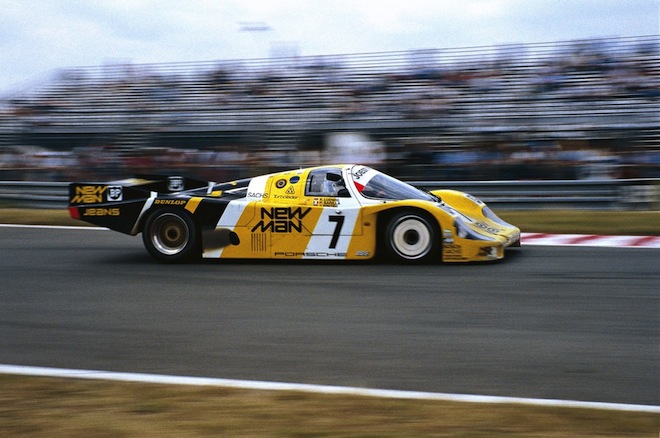 Hans-Joachim Stuck had clocked the fastest lap of Le Mans with an average speed north of 250km/h which stood as an ominous sign in qualifying.

But Klaus Ludwig would take his third outright victory in the 956B which had won the race the previous year.

The race would be the final 24 for 6-time winner  Jacky Ickx, who finished in 10th place. 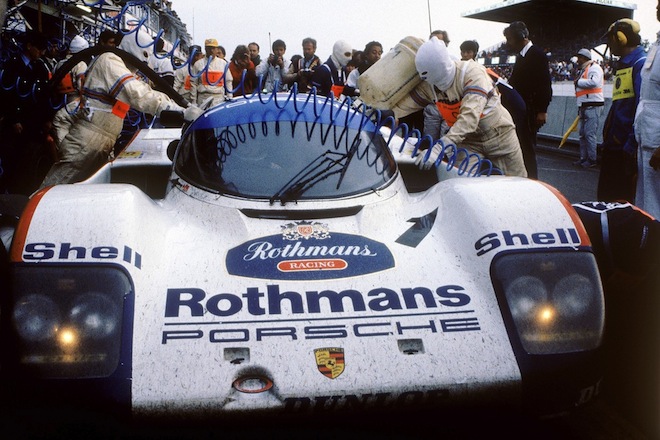 The new 962 debuts with the layout of the car seeing the location of the front axle drastically change while the wheelbase stretched to 2.77m.

The Zuffenhausen maker would be responsible for seeing its marques claim nine of the top 10 places. 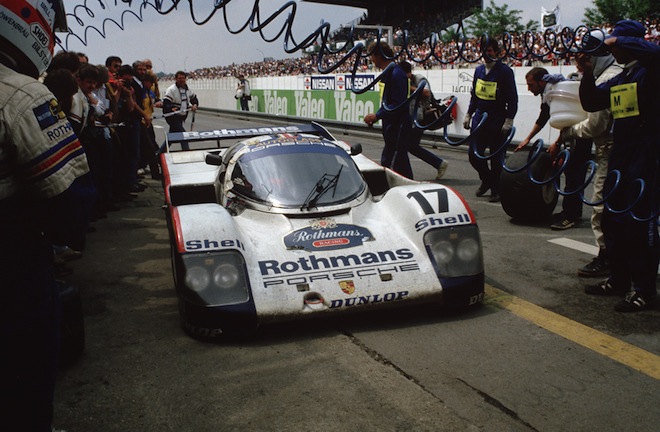 Jaguar’s XJR-8LM shaped as the car to beat. Ultimately Derek Bell, Hans-Joachim Stuck and Al Holbert claim victory but not before a bizarre lead up to the race.

It begins with the tests at Weissach when Stuck destroys Jochen Mass’s vehicle.

Mass then gets Stuck’s car at Le Mans.

Price Cobb throws another of the Porsche fleet away in practice when he writes the 962C off on a barrier.

Then soon after the start, Jochen Mass glides to a halt with engine failure caused by tainted petrol – a fate that would afflict many Porsche customer cars.

Stuck/Bell/Holbert continue with recalibrated electronics, but the work has cost them time in the pits.

During the night Stuck rolls off three consecutive stints to set up the win.

When a puncture results in a crash and a head gasket blows, two Jaguars are out of contention.

The third steers into the pits for a new gearbox.

The works-run 962C continues without problems. 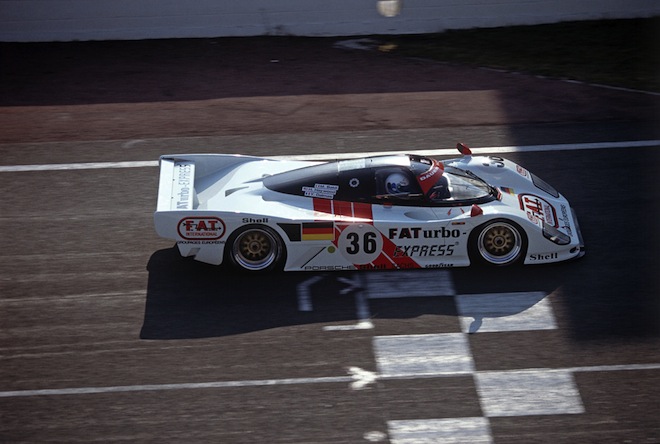 The Dauer 962 thwarts the Toyota effort by a lap 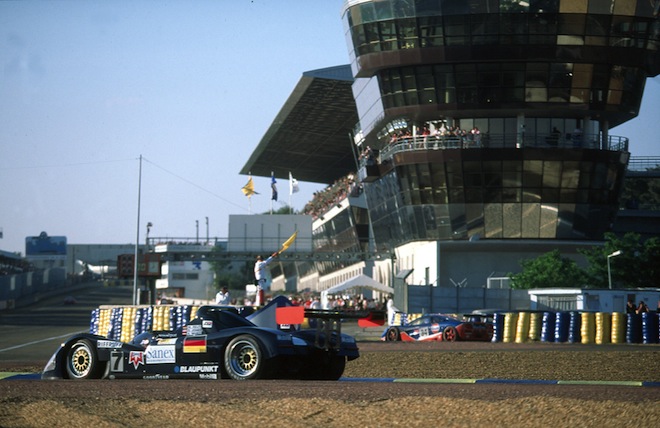 Between the Porsche factory and customer teams, the marque claims victory in all classes. Reinhold Joest took charge of the two former TWR WSC 95 prototypes that had been intended for 1995.

Joest modifies and optimises the aero with assistance from Weissach which propels Manuel Reuter, Alexander Wurz and Davy Jones to victory 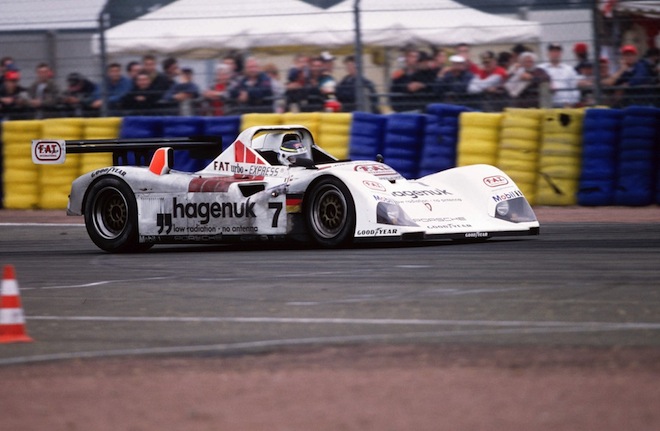 Supported by the factory, Reinhold Joest returned with a freshened TWR WSC-95.

It goes down as the fourth triumph for Joest and the 15th for Porsche. An all-new car for the burgeoning prototype class is built. The 3.2 litre twin turbo six is positioned in front of the rear axle as with the 911 GT1.

With under two hours remaining Allan McNish is 44s behind the Toyota. With five minutes left McNish reports over the radio the Toyota is out of the running.

Porsche claim the quinella with Jorg Muller, Uwe Alzen and Bob Wollek finishing a lap down on the winning Porsche. The victory was Porsche’s 16th in outright competition at La Sarthe.