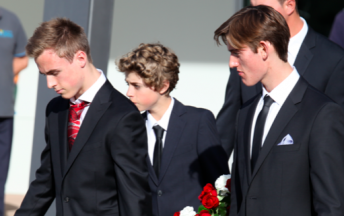 Rapidly rising open-wheel star Matthew Brabham summed up the advice his grandfather left him in three words during a tribute address at today’s state funeral.

The 20-year-old Matthew Brabham, who is based in the United States where he competes in Indy Lights, and his 19-year-old cousin Sam, who races Formula Ford in the United Kingdom, both paid tribute to their grandfather, Sir Jack Brabham.

Matthew, the son of Sir Jack’s eldest son Geoffrey, explained that his grandfather’s advice had been simple and to the point.

“Poppy’s advice to me was always straightforward, three simple words; get after ‘em,” he said.

“At first it didn’t mean much although it sank in after time.

“It reflected his amazing character. Get stuck in, lose the hesitation and excuses, ifs or buts, man-up and grow a pair and get after ‘em.

Matthew Brabham, who is making a big impact driving for Andretti Autosports in the Indy Lights series in the US, began his tribute with a light-hearted chat about his family’s daring ways.

“I’m very surprised what dad said was so nice,” Matthew said in reference to Geoffrey’s tribute speech, which included several anecdotes about near-misses while Sir Jack flew his family between race meetings during the 1960s.

“The amount of times grandpa came close to wiping out the entire family it’s a miracle us grandchildren were even born.

“However I’m sincerely grateful and bless to have grown up with Sir Jack.

“Plain and simply my grandpop, growing up as a kid, sitting at the family dinner table, listening to the stories, never-death experiences, mischievous antics was very inspiring for me.

“He’s given and will always give me incredible motivation in my life.

“I feel very privileged to have enjoyed the time I’ve had with him.

“I feel his methodology and attitudes support him as an incredible man.

“But the way he went about life was conveyed in everything he did and the moments he shared with everyone.

“I’ll always look at pop for who he was, an overall complete person which for me in my eyes is greater than any of his motor racing achievements.”

Matthew’s English-based cousin, Sam Brabham, escaped a high-speed rollover in the British Formula Ford round at Oulton Park last weekend; an accident his granddad may have been darkly been proud of.

“As I left the UK I had shaken myself up and rolled a racecar which I guess he would have been proud of,” the son of David Brabham said.

“To me and pop, had he been here, he would have been questioning why I flipped, what mechanical failure caused it and how he could fix it.

“Living in the UK, despite my racing surrounding me I was not overly interested in motor racing as a young child, he was just simply my grandfather and that was it…vaguely famous for various things he had achieved.

“He popped into my life during the years he visited Goodwood for the first time sitting in one of his racecars. But then again he was still my grandfather.

“(He) was always interested in what I was up to regardless or where I was.

“It was not until the late stage of 15 that I wanted to race cars, it dawned on me the achievements pop had created.

“Those of you who knew him would recognised the man that upon my question to him at an early kart race in Wales of, ‘do you have any advice pop?’, he just replied, ‘keep it on the black stuff, now pass me back to your father’.

“Initially I thought this was an easy concept to grasp but I guess I should have listened to him this weekend as I was sent into the tyres.

“Very recently I watched a documentary on my grandfather’s era and the realisation dawned upon me that we are very lucky and privileged to have experienced him in another light not just in racing but as we were growing up as well as so many others perished as he prevailed.

“His legacy to me, Matthew and all the grandchildren, he will never be forgotten.”