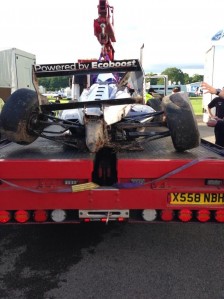 The 19-year-old, son of sportscar ace David Brabahm, had finished fourth in the opening race held in damp conditions before drama struck in race two.

Brabham ran wide at Cascades which damaged the suspension of his JTR machine. Two laps later the rear suspension failed sending him into a nasty barrel role into the barriers.

Luckily he walked away from the incident but his car was unable to be repaired for the final race of the weekend.

Brabham, who will fly to Australia to attend his grandfather Sir Jack Brabham’s funeral on Wednesday, was sporting a tribute crash helmet during the weekend.

“I got a cracking start to really put me in the running for race two,” said Brabham.

“I ran wide at Cascades on lap three and the suspension broke as a result two laps later, sending me into a double barrel roll into the barrier.

“It’s a sad end to the weekend after the highs of Thruxton and a tough few weeks with the lows of losing grandad.

“I didn’t quite get it together this weekend, but you have to get through the tough times and come back stronger. That’s what I’ll be aiming to do at Croft in two weeks time and I know JTR will do a great job of getting us back on track.” 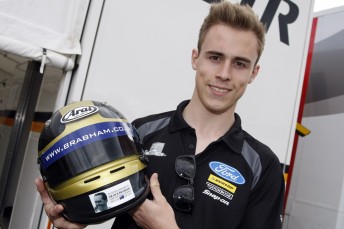 Colin Turkington moved to the top of the British Touring Car Championship standings after recording a double victory at Oulton Park.

The 2009 champion converted his pole position with a textbook drive in race one as he held off his West Surrey Racing team-mate Rob Collard to the chequered flag.

Aided by his rear wheel drive BMW, Collard slotted into second at the start after jumping MG’s Jason Plato and Honda’s Gordon Shedden. In the end, Plato managed to fend off Shedden to complete the podium.

Race two saw Turkington dominate again as he led his team-mate Collard for another WSR 1-2 finish. The encounter was full of incidents which left the stewards busy after the flag.

Audi driver Rob Austin was promoted to second spot after stewards deemed his pass on Collard before a Safety Car period was legal.

Alain Menu was issued with five points on his license after making contact with Fabrizio Giovanardi and reigning champion Andy Jordan.

The Irishman made no mistakes from the reverse grid pole as he finished ahead of Shedden and Plato. Stewards added 1.5 seconds to Plato’s time for pushing Turkington wide while battling for third, which dropped him to fourth behind the star of of the day’s previous races. 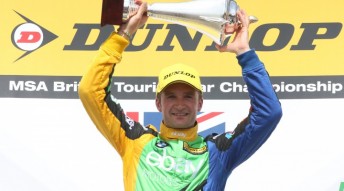 Colin Turkington moved to the top of the BTCC standings

New Zealander Earl Bamber shot to the top of the Carrera Cup Asia points standings with a double victory at Fuji International Speedway.

Bamber beat erstwhile points leader Martin Ragginer to the chequered flag on both occasions, only for the latter to twice be handed post-race penalties for contact with Alexandre Imperatori.

Race 2 was held in dry conditions following a wet day of running on Saturday.

“We’ve had a brilliant weekend in Fuji,” said Bamber, who takes an eight point advantage over Ragginer after eight races.

“It didn’t start the best, but we finished exactly where we wanted.

“This track is really amazing and it has been a privilege to be able to drive here in the dry. Japan really turned on the weather for us today.”

The event marked the first time that the Carrera Cup Asia has raced in Japan. 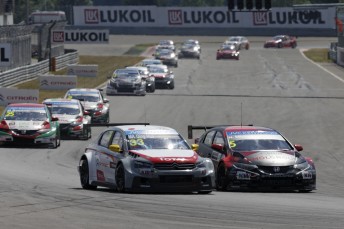 Lopez survived opening lap contact from the Honda of Gabriele Tarquini at the start which was triggered by team-mate Tiago Monteiro.

Despite being pushed wide at the corner, Lopez went on to take the chequered flag by 3.1 seconds from Tarquini and multiple World rally champion Sebastien Loeb.

Former Caterham and HRT F1 test driver Ma became the first Chinese driver to win in the WTCC as he claimed the honors in final reverse grid race.

After missing the first five rounds of the season, Ma quickly got to grips with his new machine. In the end, he managed to hold off Yvan Muller and Mehdi Bennani to take the win.